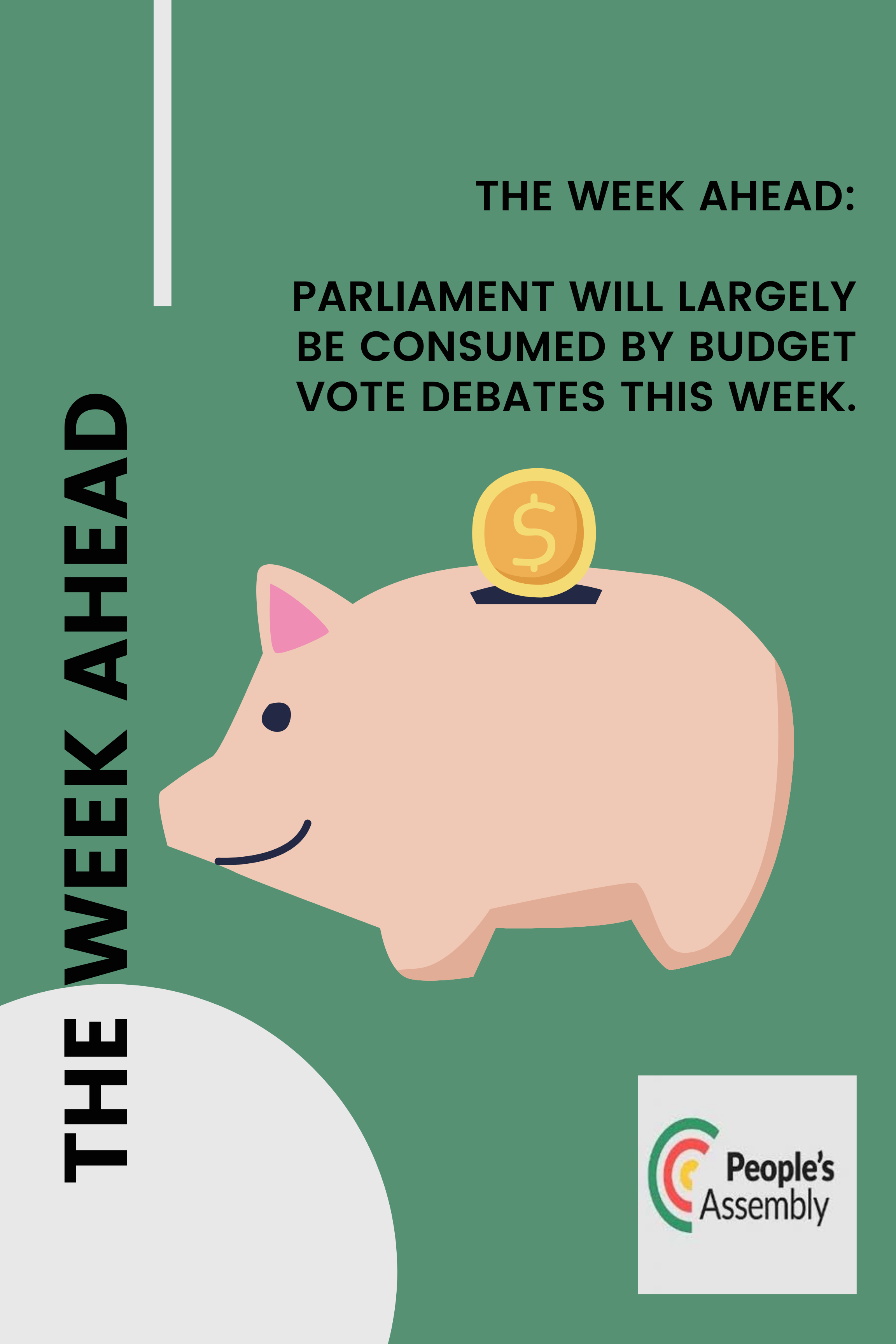 Parliament will largely be consumed by Budget Vote debates this week.

The debates allow for Parliament, and the public, to be updated about what departments are doing, how they are performing and exactly how public money is being used in a forum larger than a Committee meeting.

Each debate lasts about 2 hours and 15 minutes and take place in mini-plenaries i.e. breakaway sessions of the National Assembly. The Minister and Deputy Minister/s introduces the budget on behalf of the Department and MPs then debate the budget through a Speakers' List. Due to the tight schedule, multiple budget vote debates take place simultaneously. There are 19 debates scheduled this week. A few of the standout ones include National Treasury, Mineral Resources and Energy, Basic Education and Human Settlements.

So far, the speeches have followed a familiar pattern – a few interesting announcements, a focus on implementing government’s economic reconstruction and recovery plan, a recognition of the fiscal constraints and budget cuts and a recognition that COVID-19 has placed added pressure on government services.

You can find the full Budget Vote debates schedule

You can find all the budget vote speeches and responses here.

After each vote has been debated, each House (NA + NCOP) must vote on the whole budget. The NA vote will take place in a marathon plenary sitting on Friday, 4 June, starting at 10h00 while the NCOP vote will happen later.

Elsewhere, the NCOP has scheduled 2 sittings – for Tuesday and Thursday – where it will cover policy debates on Vote 3: Co-operative Governance and Traditional Affairs and Vote 29: Agriculture, Land Reform and Rural Development and Vote 34: Mineral Resources and Energy respectively.

On the sidelines, the NCOP has arranged a Members Support and Facilities meeting. As part of its responsibilities, Parliament ensures that facilities remain relevant and support the changing needs of MPs. In addition, it provides capacity building and training for Members in order for them to fulfil their constitutional responsibilities

Beyond this, nation-wide public hearings on the Expropriation Bill continue this week (20-23 May). Hearings will take place in KwaZulu-Natal. This is the fifth provincial stop. Follow here.

There is a lot of significant action in the Committee corridor. Here is a run down of the highlights:

Select Committee on Finance, (National Council of Provinces), [Briefing by IRBA on: Implications of changes in IRBA over the past 6 months; On implementation of the amendments to the Act; On their last quarterly report], Virtual Meeting Platform, 14:00

Standing Committee on Public Accounts, (National Assembly), [Hearing on the annual report and financial statements of the Compensation Fund (CF), for the financial year 2019/20, as well as irregular, fruitless and wasteful expenditure], Virtual Meeting Platform, 09:30-13:00

Joint Standing Committee on the Financial Management of Parliament, (National Assembly and National Council of Provinces), [Briefing by the Executive Authority and the Minister of Finance on progress made as far as addressing concerns about the allocation of Parliament’s budget (including a briefing by the Chairperson of the Parmed Board on progress made in resolving the issues around the Parmed liability); Consideration of committee minutes and reports], Virtual Meeting Platform, 12:15