"My message is South Africans need not despair because of the many challenges we face. Citizens should get involved, question representatives and demand feedback and, most importantly, be active at the polls and vote with their heads." 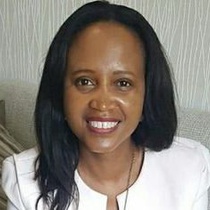 Growing up in the township during the 80’s politics influenced me in a number of ways. The school I attended, Vulamasango High, was oftentimes involved in protests and riots. Academic activities were at a low ebb. Meetings were held to encourage students to continue the struggle. Fellow school mates would disappear at night during police raids and/or crossed the South African borders. It was a politically charged period and the need to study was not apparent. It was freedom first and education last. On the contrary, this slogan was not welcome in my house. I remember one evening there was a gathering at night where one of our school mates was accused of being an informer. He was ‘neck-laced’ there and then by fellow school mates a couple of streets from my home. He was only 15 years old; that shook me to the core. Fortunately, I was never jailed or saw the need to go to exile. With the fear that I would not complete my matric, my parents decided to move me to a school in Wedela High, near Potchefstroom, where I completed my Matric. That was the beginning of a new chapter in my life and an opportunity to go to University. Fast forward to late 2013, I was introduced into the DA by a friend. I became an activist for a short period of time and applied to be an MP. I was elected MP in 2014.

What does your job as an MP entail? What do you enjoy about being an MP? Being a Member of Parliament is both a pleasure and a great privilege because you become the voice of the people. Learning how to use that voice is a challenging skill and once you master that skill you can achieve so much; with a science background, both academic and industrial, being a parliamentarian is a lifelong learning process of soft skills and I am still learning.

My typical week begins with political activism in my constituency. Then for the rest of the week, I would be in Cape Town for parliamentary committee meetings and plenaries. This is where we hold the Executive to account through parliamentary oversights.

What are your or your party’s aspirations/ plans for the Sixth Parliament? Poverty, inequality and unemployment have negative impacts in our society and result in the social ills we are seeing throughout the country today. I believe there are two things that can uplift the state of affairs in SA; quality education and a growing economy. Quality education has the potential to minimize inequality and unfortunately, quality education in this country is only afforded to and by those who can pay for it. With high unemployment comes poverty and many parents rely on public schools which are failing our learners. Learners either drop out of school or because of the low standard of education they receive at school; they become unemployable. It is a vicious circle!

My aspiration together with the DA is for this government to grow the economy. Growing our economy will not necessarily get rid of all our socio-economic problems but it can reduce inequality. According to Statistic SA, 10.2 million South Africans are without jobs and 50% of our youth are unemployed. The DA policy offers the “Economic Recovery Plan”, which is a pro-growth, pro-investment and pro-job creation reform. This policy is a step in the right direction. We need to cut the wage bill and roll-out voluntary civil service year for young people and finally, create an enabling environment for job creation.

What obstacles prevent Parliament from doing its work and how would you fix it? In the 5th Parliament, we saw how the then Speaker, Ms Mbete, would muzzle MPs because she felt it important to protect the ruling party. Former Speaker Mbete misunderstood her role, which was that of an impartial arbiter. Another hallmark of the 5th Parliament was the blatant acknowledgment that while MPs pledge their allegiance on the Constitution they, in actual fact, declared that their party came before the Constitution. Former President Zuma was the champion of that sad period.

There were also examples of MPs lying under oath and yet receiving no sanctions for doing so. Our new President, Mr Ramaphosa, is a case in point. The 5th Parliament will certainly be remembered for the fact that many MPs would not fit the Honourable title and that opposition parties often resorted to courts for Parliament to perform its duties.

Parliament needs to be acting independently as its function is to hold the Executive to account. For that to be happening, a mechanism that ensures the Speaker of the House remains impartial needs to be established. Possibly the best solution would be to appoint the Speaker from outside the MPs pool, similarly to the appointment of the head of a Chapter Nine Institution.

Which constituency office have been assigned to? Can you give examples of Constituency work you engaged in?

I have just been allocated a new constituency, Moqhaka and Nala Municipalities. Until recently I was allocated Ghariep, Kopanong and Letsemeng municipalities. My typical week starts on Mondays where I have to be in my constituency working with councillors and activists to address issues facing communities. A year ago, I organized a march in the Kopanong Municipality, Jagersfontein, where the community had been lacking water service since 2013. Subsequent to that, I took part in dealing with protests in Koffiefontein which were affecting final examinations in five schools because of a shut down. I also conducted public meetings with communities to hear them out as they were voicing their frustrations around service delivery. Concerns from communities are subsequently brought to Parliament as motions, questions or petitions. I also do portfolio-related oversight in various provinces, such as walking long distances with learners to school just to experience their struggle relating to lack of transport and the need to provide scholar transport.

Does Parliament do a good job of holding the executive to account? If not, what can be done to improve this? No. Parliament is a platform where the government can directly respond and answer to the concerns of the citizens. We have seen rampant corruption, lack of accountability, mismanagement of state funds and no convictions.

What can be done to get citizens more interested/ involved in Parliament? Is this an area where Parliament can improve and if so, what recommendations do you have? What are you passionate about? This applies both in political/ professional arena as well as personally? It is worrisome that for such a young democracy like South Africa and its many challenges, voter participation is very low. There is, indeed, the need for the Independent Electoral Commission to implement a literacy program on constitutional matters which would eliminate voter apathy. I am passionate about education because it is the only instrument that will set us free.

What is your message to South Africa? Our Country is in crisis! We are mourning women and children who are being raped and murdered by men. Xenophobia has reared its ugly head once again. Our constitution enshrines the right to freedom from all forms of violence and that right applies to all who live in South Africa. We need to optimise the democracy we fought so hard for. Democracy works well when the electorate is active, politically aware and participating. My message is South Africans need not despair because of the many challenges we face. Citizens should get involved, question representatives and demand feedback and, most importantly, be active at the polls and vote with their heads.

To learn more about this Member, visit her profile.