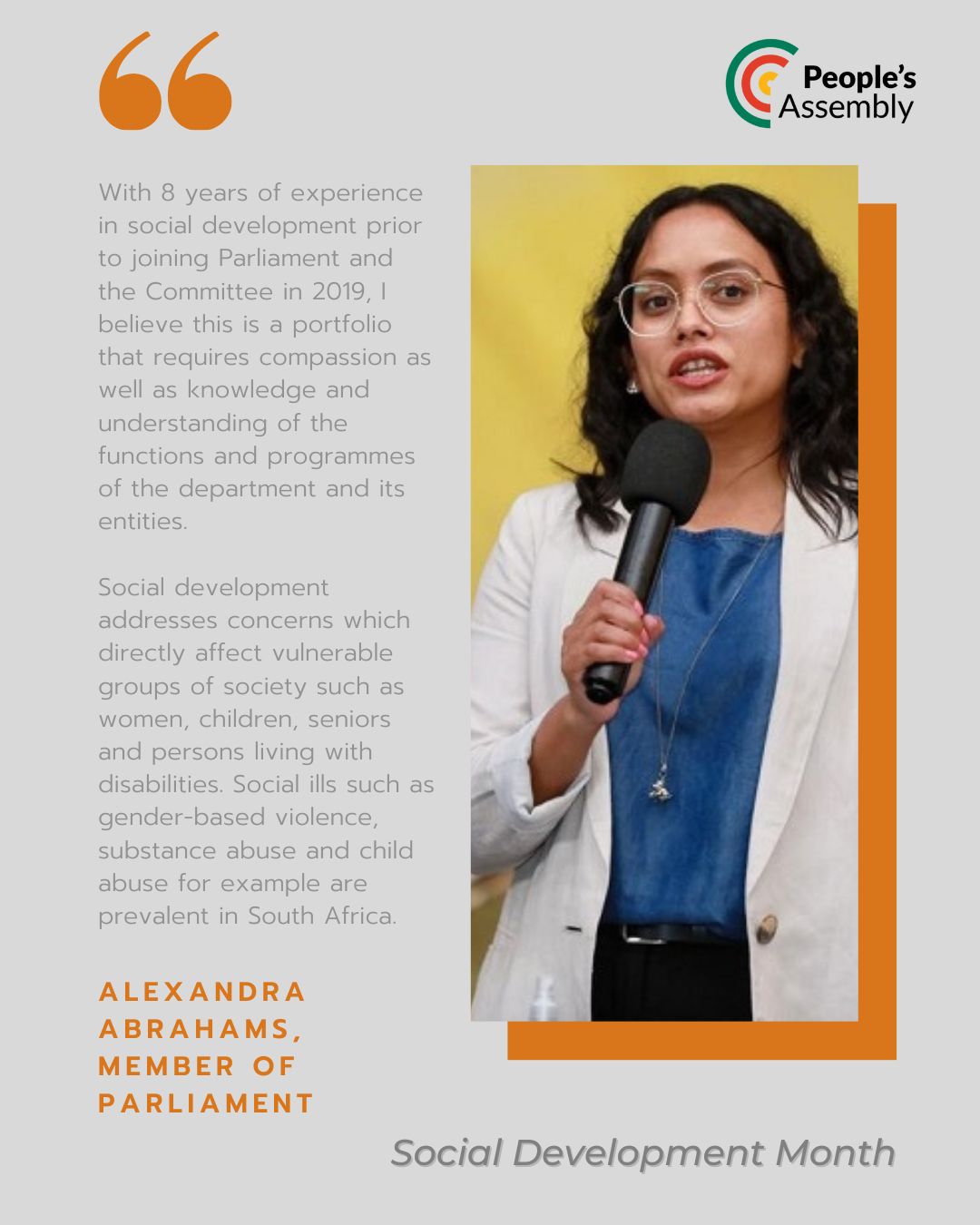 What is your role on the Portfolio Committee on Social Development?

I represent the Democratic Alliance in my capacity as Member of Parliament (MP) on the Portfolio Committee on Social Development. As MPs we have input in agenda items, however, most of the agenda is made up of statutory items such as annual reports, quarterly target and budget reports for the Department of Social Development (DSD) and its entities, SASSA and the National Development Agency (NDA). We also interrogate new and amended pieces of legislation, which follows a strict process as per the National Assembly rules.

Our primary role is to hold the Minister, department and its entities to account on the impact and shortcomings of various DSD programmes, as well as to highlight matters which are raised by our constituents.

Why is social development important to you?

Social Development is important to me because through good and effective policy decisions, we can make a real, tangible difference in the lives of vulnerable citizens.

With 8 years of experience in social development prior to joining Parliament and the Committee in 2019, I believe this is a portfolio that requires compassion as well as knowledge and understanding of the functions and programmes of the department and its entities.

Social development addresses concerns which directly affect vulnerable groups of society such as women, children, seniors and persons living with disabilities. Social ills such as gender-based violence, substance abuse and child abuse for example are prevalent in South Africa. DSD cannot act in isolation, but it is the primary department under which many social ills can be addressed.

South African Social Security Agency (SASSA), while far from perfect and can be significantly improved, is still a form of social protection for millions of vulnerable citizens. But in order to make SASSA clients self-reliant, grants must be accompanied by educational and skills development as well as capacity building community programmes and incentives. If we do not genuinely uplift individuals, the state will soon find itself with a social grant bill which is unaffordable to sustain. Therefore, DSD has a role to actively involve civil society sectors, private sectors as well as citizens in order to achieve success as part of a whole society approach. South Africans want the opportunity to work, their independence and dignity, as well as the ability to provide for their families and those they care for.

What do you believe to be the most pressing social issues in 2023?

I believe as a country we must be guided by the 17 Sustainable Development Goals and it just so happens the first five of those goals tackle social issues.

Child stunted growth in our country has hovered around 27% since 1997. It is devastating that 199 children under the age of five died of malnutrition in the first two months of this year alone.

2 818 children under the age of five died of malnutrition in hospitals over the past three years.

Child neglect, abuse and baby abandonment is also prevalent, with a 3-month-old baby abandoned in Verulam KZN and a new-born baby being found in a pit latrine in Mbazwana, KZN just this week. These babies were fortunately found alive, however, many baby abandonments end tragically. Baby Savers or Baby Boxes are still not legal in South Africa despite the growing number of abandoned babies. More can be done in this regard.

GBV is our country’s second pandemic. Not a day goes by in South Africa where we don’t receive reports of GBV. While some legislation has been recently been passed, swift arrests followed by prosecutions and sentencing by our police and judiciary system is severely lacking.

Gender equality in homes and places of work must be realised. It must be prioritised 365 days a year and not a focal topic only during women’s month. Strong people and strong social structures such as families, in all their different manifestations, flourish in strong communities. We have a duty to do everything in our power to strengthen and support the building of durable social structures that promote cooperation in our communities, thus family strengthening as well as family reunification programmes within DSD must be accompanied by credible budget allocations. A family suffering under the many social ills and burdens leave open wounds and scars which are carried through into society.

What are some of the current issues that the Committee is dealing with?

The Children’s Amendment Bill and countrywide public hearings together with the ongoing Covid-19 SRD R350 grant and ECD migration from DSD to DBE where prioritised by the committee and took up most of our time.

We are now in the fourth term and unfortunately we have not received a copy of the fourth term programme as yet, but annual reports of DSD and its entities are on the agenda for our first meeting this term.

As a committee we still have the Victim Support Services Bill (VSS) which was presented to the committee, but DSD has gone back to the drawing board after receiving public comment. This bill, among other things, seek to regulate the NGOs which work with Victim Empowerment Programmes (VEP) such as women’s shelters. NGOs in the social welfare space do amazing work and DSD is reliant on NGOs to fulfil its mandate. Legislation must not be designed to create unnecessary red tape for NGOs, which more often than not, negatively impact on vulnerable clients. I look forward to further interrogating this bill when it is presented to the committee again.

I have personally written to the Chairperson of the committee to request a meeting whereby the relationship between social workers, in both private and NGO sectors, and DSD are discussed as there has been troubling reports such as: no cooperation and support, poor service delivery, terrible communication - cannot get hold of DSD, lack of resources, poor handling of cases, problems regarding placement of children, incompetence and acting in their own interest or having political agendas.

Social workers, as well as the employment of more social workers, has been a consistent topic raised in our committee. Social workers are currently overworked and suffering burnout due to the overwhelming number of cases. This is an area that does need urgent and immediate attention.

The lifespan of the Committee will end in March 2024. What more do you want to achieve by then?

The absorption of qualified social workers many of whose scholarships were paid for by DSD, is a matter this committee must see through. This involves a number of other departments such as health, education, police for example, where the employment of social workers is crucial. Some social worker posts within NGOs are subsidised by DSD, but there is still more that can be done to assist in this regard.

As mentioned earlier, the VSS Bill must be completed and there are various polices which have been in draft format for many years such as the maternal support policy, linking of child support grant beneficiaries to government’s basket of services policy and that of the White Paper on social welfare and families which must still be presented to the committee.

At the end of the third term, the National Assembly passed the Fundraising Amendment Bill which will see the establishment of the Disaster Relief and National Social Development Fund. The regulations pertaining to this fund must still be presented to the committee. This will be extremely important as disasters, be it manmade or natural, or pandemics will continue to occur and it is the state’s responsibility to ensure timeous and effective relief to affected victims are administered smoothly and without corruption.

Do you have any specific policy ideas in mind to improve quality of life for South Africans?

As a Democratic Alliance public representative, our party has the very best policies to improve the quality of life for all South Africans. I would not do these policies justice in a paragraph or two, but would highly recommend citizens visit our website here to view these policies.

The policies cover many affects such as energy and electricity, economics and economic justice, education, wellbeing, land, housing, environment, government and transport to name but a few.

As a Party we are currently in the process of reviewing all our policies, which we do regularly, and citizens will soon be able to view these updated policies on the same platform.

How can citizens get involved in Parliament and keep track of your committee’s work?

Parliament sittings as well as committee meetings can be viewed online via the Parliamentary YouTube channel and DSTV channel 408. Public participation sessions and various oversight visits can be viewed on the parliament Facebook page as well the official website. Members of the public can also follow political parties and MP social media pages.

The Parliament fire was extremely devasting as regular tour visits, in particular, learner tours were one way the public got to experience Parliament. Now Parliament essentially can only be viewed by those fortunate to have DSTV or a device to view online provided they have data, internet or in a free Wi-Fi zone. As we know, many South Africans do not have access to this. Parliament as well as committee meetings are hours long so not everyone can afford to spend money on data to watch these long proceedings. Parliament must urgently reconvene in a venue with suitable public access.

I would encourage citizens to be in contact with the relevant committee secretaries for term programmes to find out what is on the committee agenda and to have access to Zoom links where applicable. Citizens may also contact MPs as all our contact details are on the parliament website.

The Parliamentary Monitoring Group (PMG) is also an informative and unbiased platform which records minutes of committee meetings.

This is the People’s Parliament and requires citizens to actively participate and inform their public representative about issues directly affecting them.

What else can individual MPs, the Committee, and Parliament do to improve oversight over the Department and its entities?

I am firm believer of unannounced visits. You get a true reflection of the operations and programmes.

As MPs we are able to submit written questions to Ministers which are guided by the National Assembly Rules.

Ministers, departments and entities must be held to account. This is one of the core functions of Parliament and committees which cannot be a tick box exercise. We have all borne witness, and the Zondo Commission Reports confirms, Parliament is often slow to act, if at all, in holding Ministers and other members of the Executive to account. This must change.

As MPs, we all swore an Oath to be faithful to the Republic of South Africa . To obey, respect and uphold the Constitution and all other law of the Republic. That we will perform functions as a member to the best of our ability. This is why it is imperative that Parliament and the citizens of South Africa have the very best, fit for purpose individuals representing their interests.

The state as well as public representatives must always act honestly, transparently and in the best interests of all South Africans.