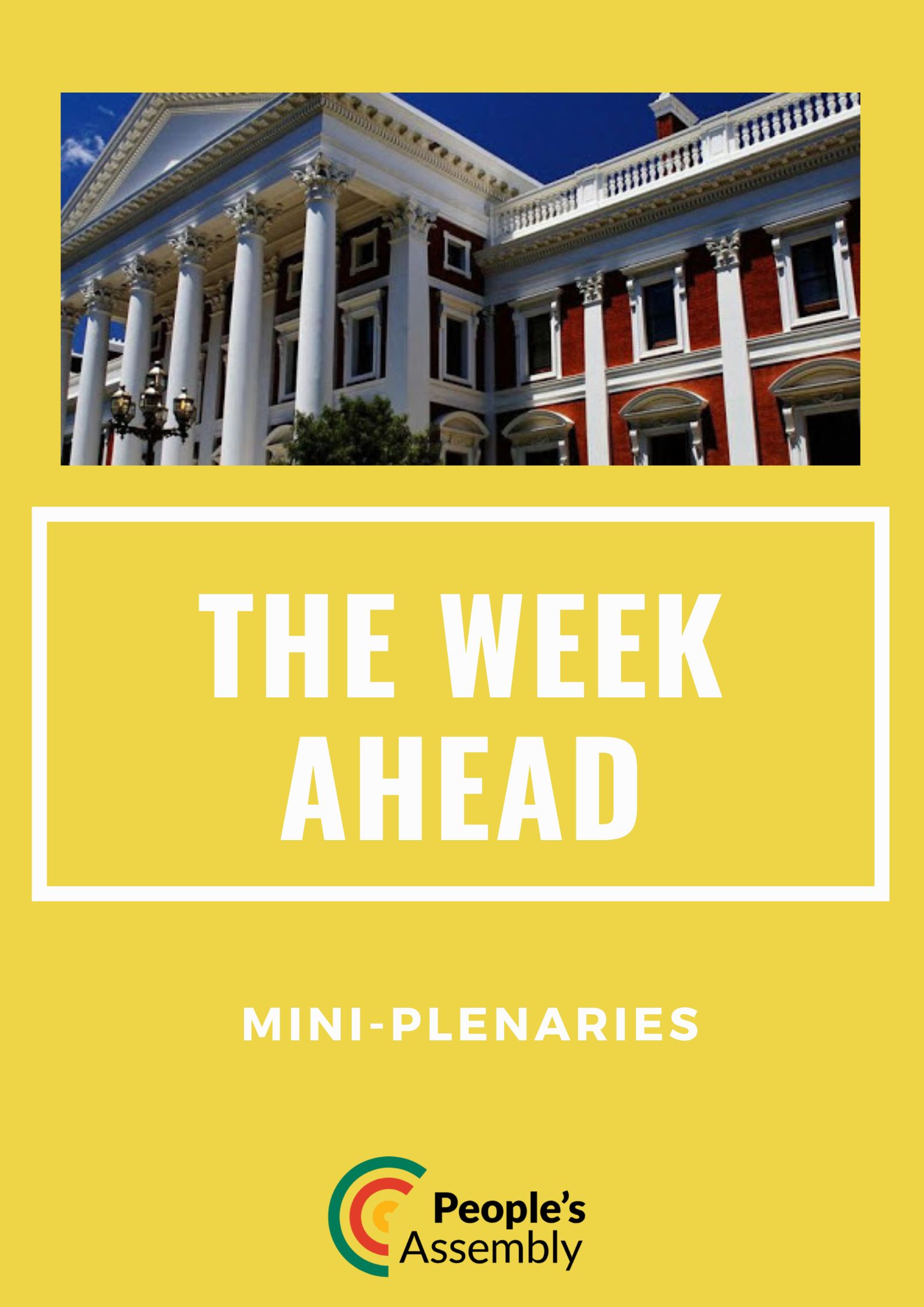 There are five weeks left until Parliament rises for the year.

The NA chamber has a full programme and will be sitting for 3 days: Tuesday’s agenda is pedestrian, with lawmakers considering multiple Budgetary Review and Recommendation Reports.

On Wednesday, select Ministers in the Governance Cluster will be probed on a variety of matters during their scheduled oral reply question session. In addition, MPs will consider the Standing Committee on Finance’s Report on the 2022 Fiscal Framework and Revenue Proposals. The Fiscal Framework gives effect to the national executive's macro-economic policy.

There are two mini-plenaries scheduled on Thursday. They serve as breakaway sessions of the NA. According to the rules, any matter may be discussed or debated in a mini-plenary session. This mechanism provides an opportunity for the House to debate a particular topic without having to take a decision at the end of the debate.

Mini-plenary 2: -Subject for discussion (Mr M Hlengwa, IFP): Building a culture of accountability and responsibility to balance with the proper exercise of constitutional rights and freedoms (90) -Subject for discussion (Mr P A van Staden, FF+): The prevalence of corruption, poor management and incompetence in public health care which has led to the violation of the constitutional rights of patients, backlogs in medical procedures and a multitude of medico-legal claims (90)

Elsewhere, the NCOP has arranged a Ministerial Briefing session on Tuesday. The focus is on measures to unlock the full potential of the township economy and industries. On Wednesday, delegates will debate Cross Border and Transnational Crime, and consider the Select Committee on Finance Report on the Revised Fiscal Framework and Revenue Proposals. On the following day, motions, reports, legislation and debate are on the plenary programme. On Friday, the NCOP’s Women’s Charter Review report back session takes place in the Free State.

A multi-party delegation will wrap up their participation in the First Ordinary Session of the Sixth Pan-African Parliament on 12 November 2022.

In the background, the work of the independent panel, which will determine whether President Ramaphosa has a prima facie case to answer on Phala Phala, will enter the next phase.

According to the timeline, the panel will consider all information received, deliberate and finalse its report between 7 and 17 November.

It’s another full week in the Committee Corridor. Here is a rundown of the highlights:

Standing Committee on Public Accounts, (National Assembly), [Briefing by SAA on the progress made by the management since the last meeting with Committee and investigations conducted by the SIU on SAA], Committee Room M46, Ground Floor, Marks Building, 09:00-13:00

Portfolio Committee on Water and Sanitation, (National Assembly), [Briefing by the Auditor-General of South Africa on its consolidated report on work of water boards;], Virtual Meeting Platform, 09:30-13:00

Portfolio Committee on Police, (National Assembly), [Briefing by the Independent Police Investigative Directorate (IPID) on the investigation into the murder of Lt Colonel Kinnear; Briefing by the Minister, National Commissioner and Directorate for Priority Crime Investigation (DPCI) on the progress made to IPID recommendations regarding late Lt Colonel Kinnear], M515, Fifth Floor, Marks Building, Parliament, 09:00-13:00

Portfolio Committee on Public Enterprises, (National Assembly), [Briefing by the Parliamentary Legal Services on the following issues: how Parliament can exercise oversight over business rescue process of state-owned companies; legislation relating to Business Rescue and Liquidation processes, challenges and recommendations. Legal opinion relating to the legislative framework that prohibits state organs from collaborating or doing business together (public-public partnership) for the public good], Virtual Meeting Platform, 10:00

Committee for Section 194 Enquiry, (National Assembly), [Hearings: Day 33 – Ms Nelisiwe Thejane to appear before the Committee for cross-examination by Adv. Busisiwe Mkhwebane legal team], Hybrid (Committee Room M46, Ground Floor, Marks Building and Virtual Meeting Platform), 10:00 Select Committee on Security and Justice, (National Council of Provinces), [Briefing by the Independent Commission of South Africa on the formula for the calculation of seats as proposed in the Electoral Amendment Bill [B1B-2022] (S75); Briefing by the Department of Justice and Correctional Services on its response to the public submissions on the Drugs and Drug Trafficking Amendment Bill [B19-2022] (National Assembly – sec 75); and Consideration of the Drugs and Drug Trafficking Amendment Bill and Report], Hybrid (Virtual Meeting Platform and Venue to be confirmed), 10:00-13:00 Portfolio Committee on Health, (National Assembly), [Clause by clause deliberations on the National Health Insurance (NHI) Bill], Virtual Meeting Platform, 10:00-13:00

Committee for Section 194 Enquiry, (National Assembly), [Hearings: Day 35 – Mr Cornelius van der Merwe to appear before the Committee for cross-examination by Adv. Busisiwe Mkhwebane legal team, and for an interaction with Committee members], Hybrid (Committee Room M46, Ground Floor, Marks Building and Virtual Meeting Platform), 10:00 Committees provide a platform for the public to present views directly to MPs. Share your thoughts, on-the-ground experience and expert information with the relevant committees. Critically, what questions should MPs pose to the Executive as they conduct their oversight work? Write to a Parliamentary Committee