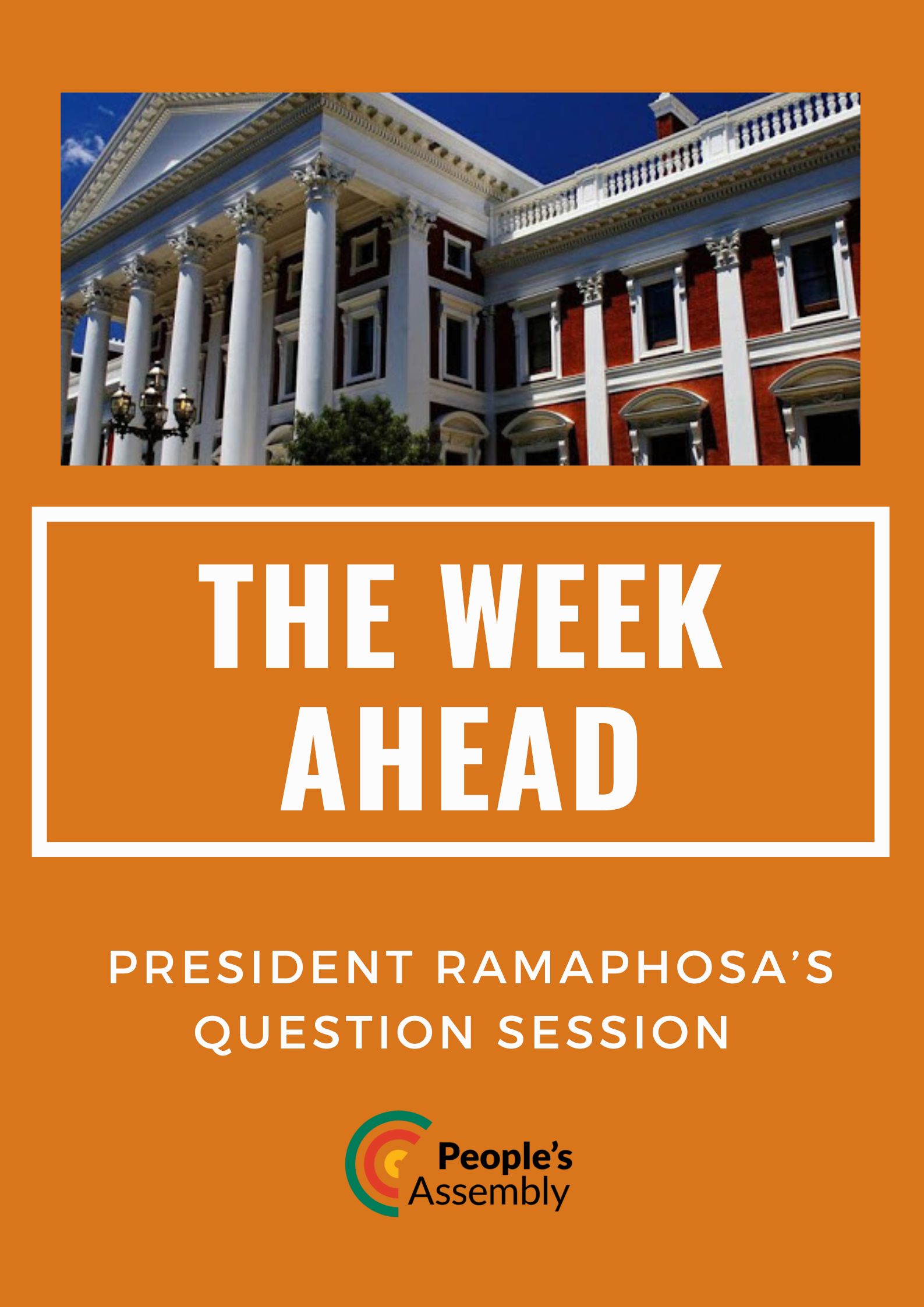 The President's oral question session - on Tuesday - is the high point of the parliamentary week. The President is required to answer up to six questions of national or international importance once per term in accordance with the annual parliamentary programme. Four supplementary questions, arising from the reply to a question, are allowed during the three-hour slot. This engagement is one of the ways in which Parliament holds the President accountable. It is also an opportunity for legislators to interact directly with the President.

The questions cover a range of matters including Eskom, illegal immigration, the Phala Phala matter and gender-based violence.

The President will make two appearances this term. The additional appearance - scheduled for 29 September – will make up for missing his question period in term two.

This will be the President’s first appearance since June when opposition parties tried to prevent him from tabling the Presidency budget, citing the criminal investigation into the robbery at his Phala Phala farm.

Since then, following a motion by the ATM, Parliament has initiated an enquiry into the removal of President Ramaphosa from Office on specific charges. This includes referring the motion to an independent panel to conduct a preliminary assessment on whether sufficient evidence exists to show the President committed any of the violations specified in the motion.

Political parties have until 1 September to nominate candidates to serve on the Panel. This is the background against which the week's parliamentary action will unfold.

Nothing energises MPs like the prospect of a challenge to the President so we can expect another robust session.

Wednesday’s debate to commemorate National Women's Day is another point of interest. This is a standing item on the parliamentary programme and is held every year. The 2022 theme is: Debate on National Women’s Day: “Women’s socio-economic rights, empowerment and resilience”. On the same day, select ministers in the Peace and Security Cluster will be in the spotlight when they answer oral questions.

On Thursday, the main plenary highlight is the urgent debate on a matter of national public importance: “The economic impact of theft and vandalism of public infrastructure”. The debate is sponsored by the DA. According to the party, theft and vandalism of public infrastructure costs State-owned enterprises (SOEs) R7 billion each year, and results in R187 billion in economic losses to our country. The DA says it will use the debate “to call for national government to join our local governments’ efforts to address and eradicate this scourge. We have a number of interventions that will ensure the safeguarding of public infrastructure and will help right our economy”.

Over in the NCOP, there will be a Ministerial Briefing Session on Tuesday. The focus is on measures to mitigate against fiscal leakages and their impact on service delivery.

Ministerial Briefing Sessions are a regular feature of the NCOP’s programme. They serve as a platform for the Executive and provinces to discuss and highlight national and provincial perspectives on issues. The Ministers of Finance and Cooperative Governance and Traditional Affairs will be in attendance.

Elsewhere, Parliament’s delegation to the Pan African Parliament will continue participating in that body’s Committee Sessions which run until 8 September. Below are the highlights in the Committee Corridor:

Select Committee on Health and Social Services, (National Council of Provinces), [Progress Report on the implementation of the child Support Grant (top-up) for orphans in the care of relatives: Briefing by the South African Social Security Agency (SASSA)], Virtual Meeting Platform, 10:00-12:30

Joint Standing Committee on Defence, (National Assembly and National Council of Provinces), [Briefing by the NCACC on its first and second quarterly reports (if available); Update on Open Secrets and the Southern African Litigation Centre court case, and possible demonstration of the new IT system; Consideration and Adoption of minutes], Virtual Meeting Platform, 18:00-21:00

FRIDAY, 2 SEPTEMBER 2022 Portfolio Committee on Cooperative Governance and Traditional Affairs, (National Assembly), [Consideration of petition by Ms R.M.M Lesoma on behalf of the shack dwellers in Khayelitsha, Sub-council Ward 10, calling on the assembly to investigate service delivery, better clean living conditions, access to water, toilets, and better shelter in their area (ATC 11 December 2020)], Virtual Meeting Platform, 09:00-12:30 Standing Committee on Appropriations, (National Assembly), [Briefing by the South African National Defence Force (SANDF) Department of Works and Infrastructure (DPWI), and National Treasury’s Executive Leadership on the progress made regarding the devolution of the infrastructure maintenance function from DPWI to the SANDF], Virtual Meeting Platform, 09:00-13:00

Committees provide a platform for the public to present views directly to MPs. Share your thoughts, on-the-ground experience and expert information to the relevant committees. Critically, what questions should MPs pose to the Executive as they conduct their oversight work? Write to a Parliamentary Committee