"We need to get people informed about Parliament. At the moment, people do not have information. Some of them do not know that they can petition to Parliament." 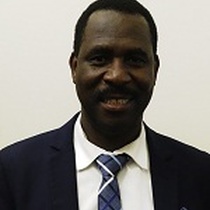 I come from a very poor family and I to experienced some of the effects of apartheid. My political journey started at a very young age when I was active in student movements while studying in Mpumalanga. I was elected as the Deputy Chairperson of the student movement I was involved in. After my studies, I worked for the Congress of South African Trade Union (COSATU). Thereafter, I worked for Richard's Bay Minerals and I became the first full-time shop steward for the National Union of Mineworkers (NUM) in Richard's Bay. I dealt with issues of labour, trade unionism and some underground political work for the African National Congress (ANC). At that time, I was fortunate to work under the stewardship of the current NUM President (Joseph Montisetse) and the former NUM President (K Mamatlati). Under their leadership I played a vital role in the formation of NUM in Kwa-Zulu Natal.

I never thought that I would become a Member of Parliament (MP). I faced many struggles building up to this point in my political career. I was actively involved in trade unionism as the Chairperson of COSATU and NUM in the KZN. I was also the Branch Chairperson for the ANC in KZN. These strong credentials culminated in my deployment to Parliament. I was elected to Parliament when my term of office at COSATU expired in 2009. I also felt it was time to step down because I had served as the Chairperson of COSATU for more than three terms. I enjoy the legislative process of Parliament. I get to drive the transformation agenda and ensure that the country moves in the right direction.

One of the main obstacles is the limited budget allocated to Parliament, which hampers its ability to perform oversight on the Executive and Government departments. An increased budget will enhance the oversight capability of Parliament. MPs should have less time in Parliament and more time on the ground to ensure effective oversight.

I have been assigned to the deep rural Constituency of Ibiza in the KZN Province. The Constituency is under the leadership of the IFP. It is deeply rural and there are very limited job opportunities. Only one mine operates in the area. Despite this, we have organised projects in the Constituency including poultry farming and other forms of farming. We are also involved in youth development, especially in sports because the Constituency is located close to a game reserve. We also have annual activities targeted for youth in the month of June.

7. Are you happy with the proportional representation system or are you in favor of electoral reform?

Electoral reform is a good system because South Africa is not a federal state. It is important that comrades are deployed based on their capability, including councillors who are elected at ward level. People tend to develop negative attitudes with MPs and this frustrates the work that the government has to do. When a comrade is deployed into an area based on his or her capabilities, people become respectful and attentive, making it easier to get buy-in. Whatever I do in my Constituency is for the people in that area, not for my own personal gain. I believe that if I came from the area, I can find myself wanting a slice of the cake in that area and this compromises leadership.

We need to get people informed about Parliament. At the moment, people do not have information. Some of them do not know that they can petition to Parliament. They do not understand the processes of Parliament. Parliament must be taken to the people. We must have more public engagements so that people can understand the roles of different departments and other stakeholders. The departments and all stakeholders must be grouped together in one cluster. We must go back to the Imbizo system. There must be active citizen involvement. For now, only few have insider information as to what needs to be done. I would like to see the country one day living like a zebra. The zebra is a beautiful animal with both white and black stripes. It is a fragile animal and it will die when attacked in any part of the body. It doesn't matter if it is in the forehead or the neck. We must respect and celebrate our diversity as a nation. There won't be xenophobic attacks if we respect our fellow South Africans and people from other parts of Africa. South Africa was assisted by other African nations in the past. It is time for us to lend a hand. Africans love to share. I am passionate about serving people and making their lives better. I am a servant of the people.

9. What is your message to South Africa

South Africa is a great country. There is hope for the country and we can work together to overcome the various challenges. We should celebrate our diversity. I would love to see the 'Zebra' survive and thrive.