Get To Know MP Haseenabanu Ismail 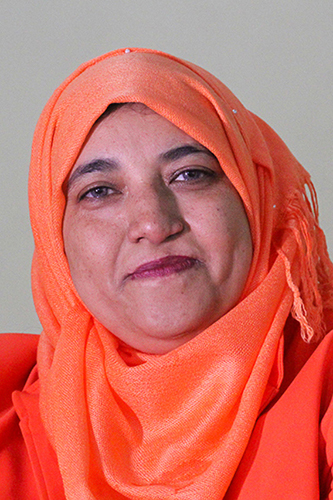 1.How did you come to join your political party and become an MP?

I have been a community activist for years. I joined the Democratic Alliance in 2011. I was a branch chair for Ward 29 from 2011 to 2013. In September 2013 I served as PR Cllr in Ward 29 Ekurhuleni. In 2016 I won the election and served as Ward Cllr of Ward 29 in Ekurhuleni. In 2019 I became a Member of Parliament and to date serve in the National Assembly.

My one goal is to bring Parliament closer to the people. I have served in many different portfolios at local government level and at National level I serve on the Portfolio Committee of Health- if we can stop the NHI - I think we will save South Africa from ruin. While we believe in Universal Healthcare for all the present Healthcare system is so fragmented that the NHI will not work.

I have done oversight at many public hospitals and have found major infrastructure issues, shortage of staff , budget constraints, non- payment of suppliers, revelations of potential corruption and I have dealt with many of the entities and asked many questions to the Minister in this regard ( the holding of the Executive to account of the Department of Health ) - I hope this will encourage others to drive an equally strong narrative. There is often strong opposition to oversight, yet this is within the mandate of every public representative to hold the executive to account and to bring and highlight issues of Constituencies to Parliament so that solutions and recommendations that are beneficial for the people can be taken.

By the end of this term if we can push for the Zondo commission findings to be investigated, the looted money returned, and the perpetrators jailed, it would be a great achievement for South Africa. It would give hope to South Africans that all is not lost.

Hopefully we could also see the end of cadre deployment and address the downfall of State Owned Enterprizes it would would be a win for the country.

From my understanding , members of Parliament have 2 spheres to their work . One is half of their time working in their Constituency and the second part is working in their Parliamentary duties in portfolio committees and parly. They have to balance their work to ensure both spheres of work is done.

It's very difficult as we have residents that escalate many service delivery issues to myself as the Political Head for the area , lots of my time is spent supporting my Cllrs . I have submitted many petitions to the Speakers office as well so that the relevant Portfolio Committees can address these petitions so that residents voices can be heard and solutions to these issues can be reached.

I am head of the Benoni Constituency in Ekurhuleni. It consists of 9 wards with 5 Ward Councillors and 2 PR Councillors. I am very much involved in my Constituency : -I attend regular public meetings, as well oversight visits to hospitals, clinics, hospitals, Home Affairs departments, Police Stations, schools, etc I also have meetings with my Councillors with stakeholders like Welfare Organisations, Residents Associations, Faith Based Organisations, CPF meetings and all stakeholders in the area.

I've noted that most inputs by members of the public with regard to legislation and Bills are just ignored or discarded. This should not be so. I think the more portfolio committees are seen working on the ground, residents appreciate it and feel their voices are heard and understood.

I've seen with the NHI public hearings , residents are so happy to see some leadership that actually give them space to talk and be heard that they use these platforms to actually say everything they need to on all matters affecting their everyday lives and from these one can determine that still much needs to be done to improve the lives of all South Africans. One can also determine that after 28 years of democracy there is no equal opportunity for all.

I've watched and listened with dismay how people inputs are actually not taken into concensus but rather only one part of their input is actually heard at these public participation meetings.

We need more avenues of public participation where actual concensus are taken of these inputs rather than just a tickbox exercise .

I think fighting for the rights of the people. We are there on the vote strength of the voters and it's only right that we stand up for what is right in all matters when representing them. I believe as a human being we need to serve with integrity and honesty and ensure in everything we do - that we are fighting for what is right.

I think quality healthcare for all and the elimination of crime.I've seen and heard of too many people dying due to our failing healthcare system. These need to be addressed to ensure quality of life and a right to healthy life which is a human right.

With regards to crime I feel that crime has reached an all time high - we have daily reports of house robberies, hi- jackings, kidnappings, robberies and murders. This is affecting people both physically and emotionally. South African crime stats are scary . Drug abuse , human trafficking and GBV cases are increasing daily yet there are no solutions by government to actually address the high crime rate.

We need to improve Crime Intelligence in this country. Just looking at the Zondo Commission we can see that corruption and crime are shocking .Even during the Covid-19 pandemic corruption was rife- one has to just look at the amount of SIU investigations into PPE , etc.

Unfortunately not. Ministers I sometimes feel forget that they are answerable for their actions and decisions and any mismanagement under their watch in each department. They forget that is our right as Portfolio committee members to ask questions and do oversight on these departments work. While we do the best we can we find that the Executive are very vague or don't reply at all to our questions . This hampers our work as Members of Parliament.

The Democratic Alliance members abide by the principles and policies of the party and we drive issues affecting residents in every sector in portfolio committee meetings , in parly speeches, in motion with notice and motions without notice as well as with petitions that we submit on behalf of citizens. We are a powerful organisation with Members of Parliament that drive the issues of the nation under one big blue machine. We believe we fight for the rights of citizens.

Parliament burning was a shock and heart wrenching as years of historical heritage , history of the apartheid era and our post democracy has been destroyed. All this and still there are no answers as to what , why and how this happened. One wonders how can South Africans be safe in their homes when the house of Parliament is not safe . I feel a deep honour to have actually had the experience of seeing the building of Parliament and participated in parly meetings before the fire. I will always feel a sense of deep loss looking at the Parliament precinct now. This has also set- back the normal working of Parliament , although , we carry on working on vitual and hybrid platforms, we look forward to going back to normal once the new building is built. Again looking at the Zondo Commission:

During the entire time that state capture was unfolding, in many instances, Parliament sat idly and failed to hold the executive to account. It failed to carry out one of its essential functions. This, in effect, meant that the institution failed the people of South Africa who elected them to office as members of Parliament should have done much more at the time to hold the executive to account. We often see at Parliament where the ANC majority has blocked public debate and stifled efforts of accountability by opposition Members of Parliament.