"We have a fantastic country that is worth fighting for. I think people tend to despair with the decline that is happening in our country, but my message is to keep fighting. We can fix South Africa!" 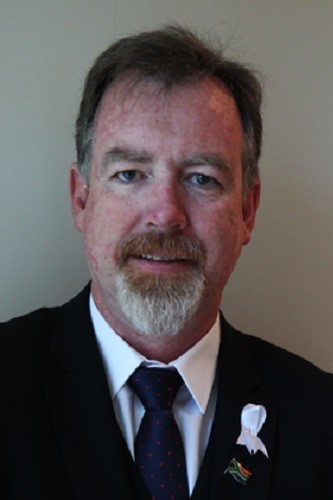 What is your political background?

I was the Mini-Mayor of Bedfordview in 1983. I have always been on committees and assisting in elections for the Democratic Party (DP) and then the Democratic Alliance (DA). I was elected to serve on the Ward Committee in Midvaal and later elected as a ward Councilor in 2011 in the Midvaal Local Municipality. I served as the Chief Whip of Council from 2011 to May 2014 and was then appointed to the Mayoral Committee, responsible for Engineering Services. I was then elected as a Deputy Mayor of Midvaal Local Municipality until July 2017 when I was elected to Parliament and served in the National Assembly in the Fifth Parliament. I have now been re-elected and serve in the National Council of Provinces in the Sixth Parliament.

The job of an MP has many different components and the one that everyone is aware of and sees is the role that we play in Parliament, where we attend committees that we are assigned to. We exercise oversight over the executive arm of government. The main focus of the public is on parliamentary sittings, although this is not where the real work is done; the real work is done in committee meetings. As an MP, I also have a big responsibility to my constituency in Emfuleni. I have a role as a public representative to the people in those areas by coordinating political activities and making myself accessible to them. I serve in the Select Committees on Appropriations and Finance and I am also a member of the Joint Standing Committee on Defence. I am happiest when I am debating ideas, and so the engagement in committees drives me, as well as the many informal chats and discussions with colleagues across the political divide.

What are you or your Party’s aspirations /plans for the Sixth Parliament?

As mentioned I am now in the National Council of Provinces, and I am enjoying it thoroughly. I now have a very different role to play and feel that I am able to represent my constituency a lot better through closer interaction with the Executive. I really hope to drive issues that are meaningful to my constituents, the people whom I represent and who put me here and make a real difference by making government relevant to peoples’ daily lives.

The ability of Parliament to hold the Executive to account is limited by the fact that Ministers often choose not to attend meetings and do not present themselves in Parliament for questioning. The lack of consequences means that there is no real incentive for them to do the right thing. In addition, I think that not enough MPs from the governing party are willing to stand up to the Executive, and hold them to account. The result is that instead of doing oversight, many MPs use their majority in parliament to allow the Executive to do as they please. That is one of the reasons that we are in the trouble we are in as a country. Ideally, all MPs should be working in the interests of the people that put them in Parliament rather than in the interests of their parties. I think a move to a constituency representative electoral system would go a long way to fixing that.

Which constituency Office have you been assigned to? Can you give examples of Constituency work that you are currently engaged in?

I already indicated that I have been assigned to Emfuleni South, south of Gauteng. The Emfuleni Municipality has been in the news a lot recently due to under-performance and of course for allowing the sewage system to deteriorate to a point where there is over a hundred megalitres of raw sewage flowing into the rivers EVERY DAY. There is no shortage of issues to drive and we are trying to get the municipality to go under administration to resolve the governance issues.

Does Parliament do a good job of holding the executive to account? If not, what can be done to improve this?

I partly answered this earlier. The Constitutional Court, the Public Protector and the Zondo Commission have all decried Parliament’s failure to hold the Executive to account. I think that stronger consequences for non-attendance at Parliament, for Members’ statements as well as for Question Time, will start to bring some accountability. The protection of the Executive by the Speaker and party-aligned MPs also needs to end…. I think the Hon Modise is better than Baleka Mbete, but there is still a lot of room for improvement.

As I said earlier, I think a constituency representative system will go a long way towards making MPs more accountable to their electorates. The ideal system, certainly for transitional arrangements, would probably be a hybrid of party lists and constituency elected representatives. It is clear that most South Africans are frustrated with the electoral system, especially the youth, and we are not inspiring them to come out and vote. Turnout drops with every election. Change is needed.

What can be done to get citizens more interested/involved in Parliament? Is this an area where Parliament can improve and if so, what recommendations do you have?

The Fifth Parliament certainly started to popularise Parliament, but then also harmed the image of the institution due to ineffective control. Social media and channel 408 have made Parliament more accessible, but I think that people are often frustrated by processes. I think when people see real, relevant issues being debated, that will be where interest is sparked. So spending more time on petitions and public inputs will go a long way to really making us the Parliament of The People. Some programming changes will need to happen, but this would be welcome. Parliament has spent far too much time on recess in the last two years and this has impacted the amount of work that could have been done. More plenaries with more time dealing with the people’s issues is what I think we need.

What are you passionate about? This applies both in a political/professional and personal arena?

What is your message to South Africans? We have a fantastic country that is worth fighting for. I think people tend to despair with the decline that is happening in our country, but my message is to keep fighting. We can fix South Africa!