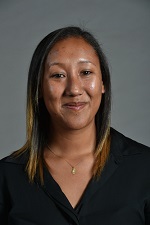 What is your political background? How did you come to join your political party and become an MP? I joined the Democratic Alliance Student Organisation in my first year at Wits and have been part of politics ever since. I was elected as a PR Councillor in the City of Joburg in 2014 and re-elected in 2016. I was elected as the Section 79 Committee Chairperson in the Gender, Youth and People with Disabilities in 2016 up until my election as an MP in 2019.

Who or what was your biggest influence in becoming an MP? My biggest influence is definitely that I want to make some sort of contribution to the emancipation of Womxn. My values are focused around peace, justice and choice and I felt that having the opportunity to serve on a platform as massive as Parliament in National Government, would allow me to influence a space that is not traditionally open to young Womxn of colour. It is very important to use whatever platform available to you to ensure that the struggles of those you represent are put on the table and initiatives are implemented.

What are you finding most promising about the Sixth Parliament? The fact that there are so many young MPs. It is an honour to serve with such incredible young leaders.

What do you foresee as the biggest challenge that the Sixth Parliament faces? The biggest challenge is dealing with the scourge of femicide and Gender-Based Violence. I think it is very important for Womxn and gender non-conforming people to be safe in South Africa and have faith in the system to seek and get justice.

What is the most important issue facing South Africa right now? The economy and how we ensure there is equal opportunity and access into the economy. Jobs provide people with many opportunities and have the ability to ensure a better life, this must be a priority.

If you were not working as an MP, what would you be doing instead? I would be in an NGO that teaches young girls how to read in Sub-Saharan Africa. I’m definitely still going to do it :)

What is your favorite part about working as an MP? Meeting incredible people doing incredible things. Young people must network with each other and assist where we can

What is your vision for South Africa, and what are you most passionate about changing? My vision is a safe, equal and opportunity centred country where choice is placed on the individual for living any life they want to. I see a South Africa that is innovative in its approach to challenges, and takes new ideas from those that are directly affected by the issues. I really want to ensure that I can make it easier for a young Womxn to reach her full potential and believe that she can make a change.

What makes you proud to be South African and proud to be an MP? I am proud of the resilience of so many Womxn of colour, and the determination to make our society one that is free from oppression and intolerance, fair in equal opportunities and skills to contribute to the economy and one that is safe.

To learn more about this Member, visit her profile.