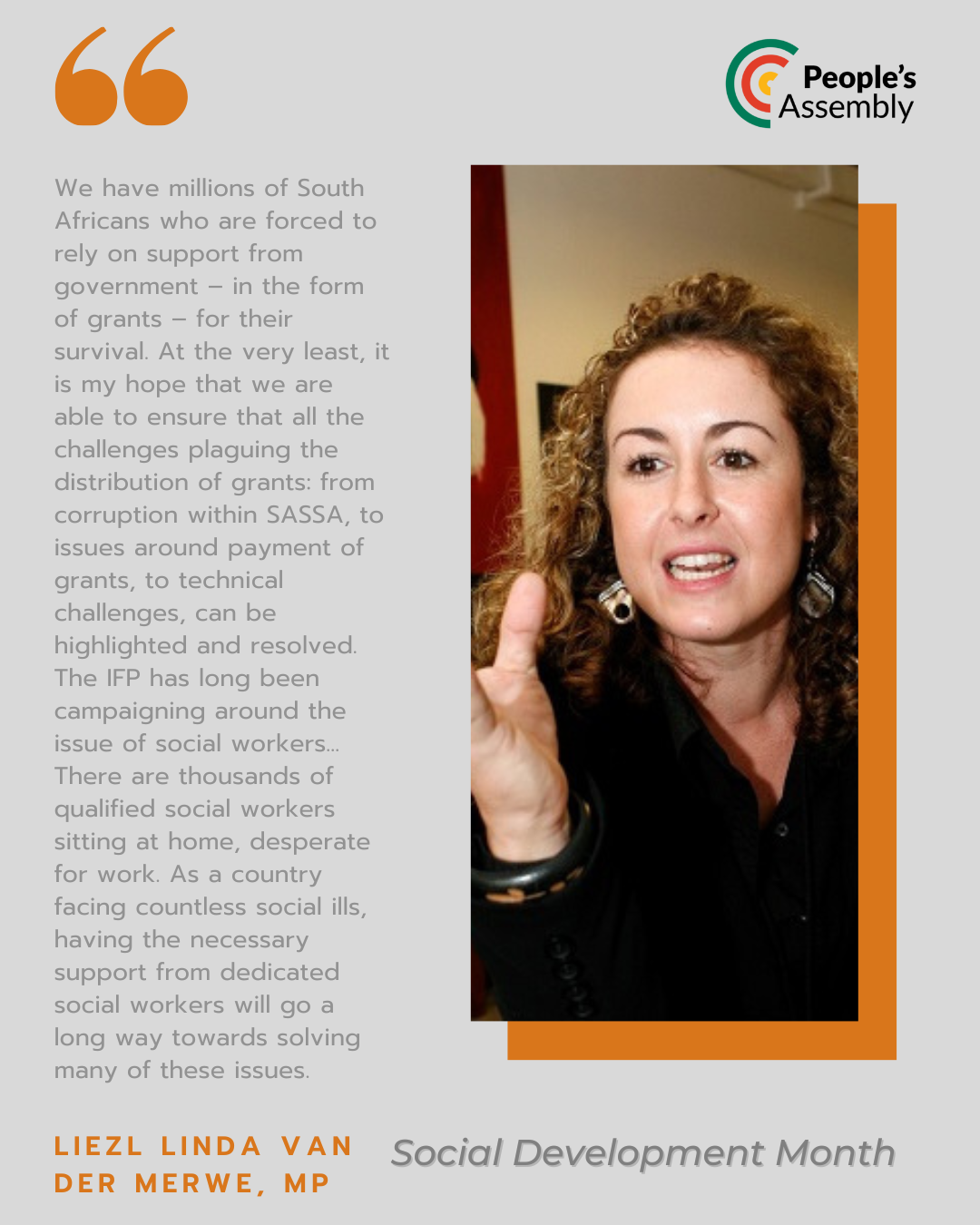 What is your role on the Portfolio Committee on Social Development?

I am an active member of the Portfolio Committee; my responsibilities include considering all legislation, reports and various other issues that are brought before the Committee, as well as to bring mandates on behalf the IFP. More importantly, it is key that we hold the Executive, and in this case, the Minister of Social Development, to account to ensure that she delivers on her mandate of ensuring a better life for the most vulnerable in our society.

Why is social development important to you?

I am committed to the IFP’s guiding principle of servant leadership, as well as contributing towards improving the lives of the most vulnerable in our country, including women, children, persons with disabilities and the aged. I have a passion for fighting for the marginalised and most vulnerable.

What do you believe to be the most pressing social issues in 2023? Poverty, joblessness, inequality, and unemployment will continue to be major challenges for the people of South Africa in 2023. The issues, in turn, have led to a rapid rise in social ills such as GBV, substance abuse, teenage pregnancies and gangsterism.

What are some of the current issues that the Committee is dealing with? The Committee has been seized with deliberating important pieces of legislation, in particular, the Children’s Amendment Bill, which we have been working on since the First Term of 2022. The Committee also routinely does oversight over the Department and its entities and will, in the month of October, be tasked with considering the Annual Performance Plans of the DSD, NDA, and SASSA, and providing constructive feedback.

The Committee has also been tasked with seeking constructive solutions to the social worker crisis in South Africa.

The lifespan of the Committee will end in March 2024. What more do you want to achieve by then? We have millions of South Africans who are forced to rely on support from government – in the form of grants – for their survival. At the very least, it is my hope that we are able to ensure that all the challenges plaguing the distribution of grants: from corruption within SASSA, to issues around payment of grants, to technical challenges, can be highlighted and resolved. In addition, the IFP has long been campaigning around the issue of social workers; the need to employ them not only in every community, but in every government Department. There are thousands of qualified social workers sitting at home, desperate for work. As a country facing countless social ills, having the necessary support from dedicated social workers will go a long way towards solving many of these issues.

Do you have any specific policy ideas in mind to improve quality of life for South Africans? Social workers: We need to strengthen laws to see to it that funds are ringfenced. We want key departments to be compelled to set aside budget to employ social workers, while provincial DSD must ringfence funds specifically for the employment of social workers.

Basic Income Grant: The IFP has long been in favour of a basic income grant; the need for such was never more apparent than when South Africans were battling the Covid-19 pandemic. Despite it seeming unaffordable currently, we are of the belief that if government would eliminate the losses incurred through irregular, fruitless and wasteful expenditure, South Africa could find budget for the grant.

Jobs for South Africans: The IFP believes that South Africans should be first in line when it comes to low-skill and unskilled employment. We therefore drafted and launched a Private Members Bill – the Employment Services Amendment Bill – which, in a nutshell, aims to “prioritise[s] the employment of South African citizens who are ready, willing, and capable of taking up the available job opportunities”.

Baby Savers: The IFP has been among the voices calling for laws to be strengthened in order to protect abandoned children; a particular initiative that we are in full support of are the ‘baby savers’. As explained by expert, Dr Whitney Rosenberg: “Baby Savers [are] not legalising infant abandonment. In fact, it [is] to reduce the ever-increasing number of infants being violently abandoned in hazardous environments… Baby Savers [are] boxes that would be situated on the walls of charitable organisations, and if a baby was placed inside, an alarm would be set off immediately to alert the personnel in the building…Baby Savers [are] different from Baby Safe Havens. Baby Safe Havens [involve] the handing over of babies to police or fire station staff, or hospital personnel. While this was another feasible way of rectifying the country’s crisis of infant abandonment, Baby Savers were South Africa’s immediate solution.”

What else can individual MPs, the Committee, and Parliament do to improve oversight over the Department and its entities? It is our job to ask the difficult questions, to speak up on behalf of those who are unable to do so for themselves. We are a people’s Parliament and need to keep the lines of communication open between the Committee and the public. In order to do this, we need to ensure a healthy working relationship not only with our colleagues, but also with the media, who have a much larger platform in communicating with the people of South Africa.