The focus on young people has gained traction in the mainstream, partly due to the effects of Covid-19 and how it has negatively impacted employment opportunities of young people.

We spoke to another young member of society, and activist in his own right. Member of Parliament Sello Seitlholo talks to us on the challenges facing youth in South Africa, and how they can become active citizens. Sello Seitlholo offers a perspective on why young people should be actively engaged in the democratic process. 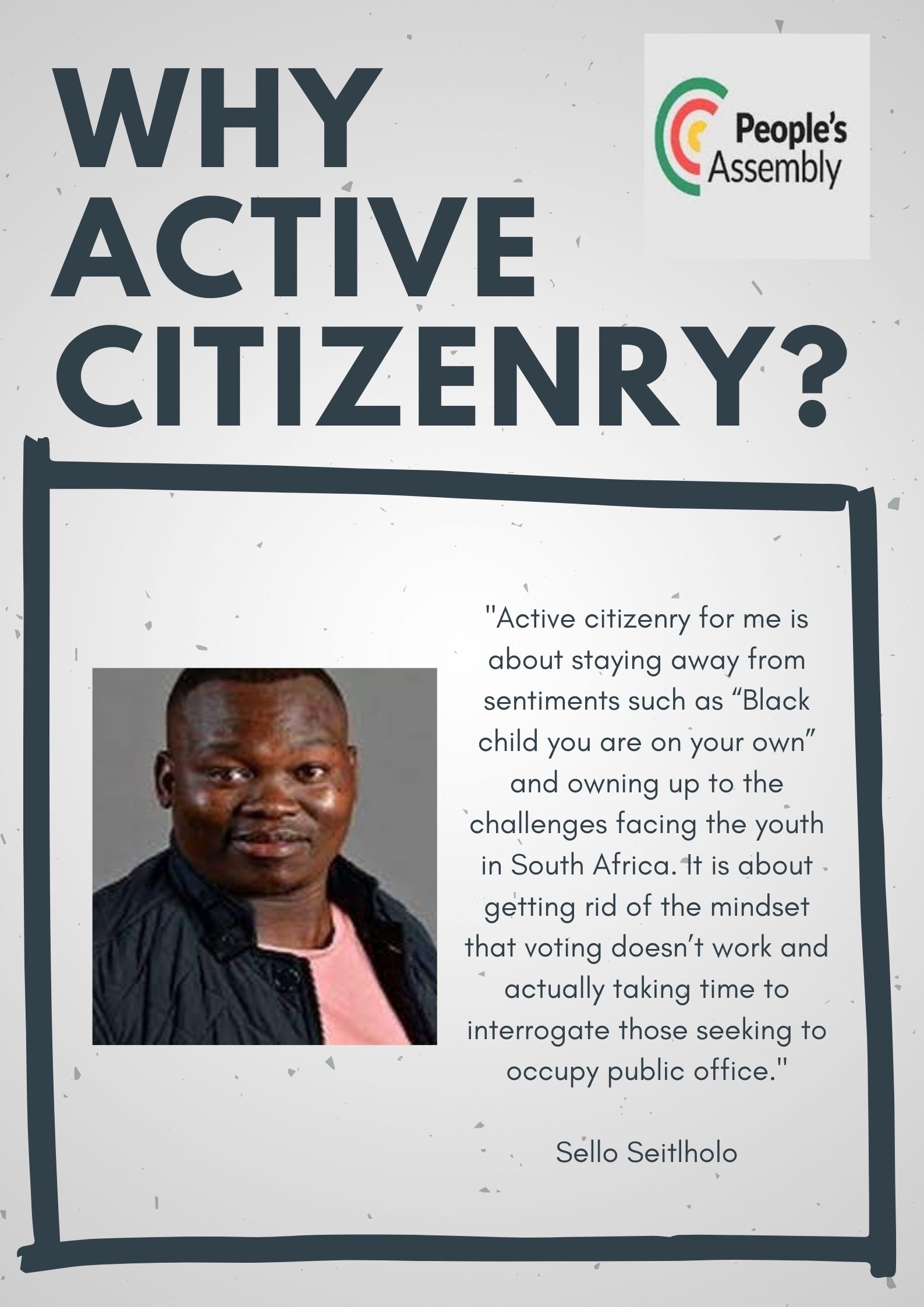 It is youth month, and once again the focus is on young people and the challenges that they face in South Africa. Some argue that this day/month is used to “tokenise” youth issues and to date there hasn't been much development for young people in this country. Do you agree? What does youth day/month mean to you?

I do agree with this sentiment.

Every year for the past 27 years, the youth in South Africa are subjected to long televised memorial celebrations of the Youth of 1976. These celebrations often come with academic quotes from struggle icons, be it Nelson Mandela on the power of Education or Steve Biko on Black Consciousness. However, despite the grandstanding and often heavily funded commemoration events, the youth in South Africa remains yet without a voice. 27 years into democracy and protest actions to access Higher Education institutions have become a norm since 2015 #FeesMustFall protests across institution of higher learning across the country.

Could it be that the Youth in South Africa are used as political pawns by those in political leadership, used to fight political battles instead of building a youth led economy at grassroots level?

Whatever the answer is, the reality is that South Africa sits now with youth unemployment figures that are the worst, with the official unemployment rate among youth (15-34 years) being 46.3% in the first quarter of 2021.

With just over 60% of registered voters below the age of 30 years, one would think that the youth in South Africa has the electoral muscle to indeed elect leaders who will not “tokenise” the struggle of the current youth in the country BUT in fact allow them to take over the baton and fight their own struggles within a conducive environment that odd to be created by government.

One can talk about a number of scenarios where government at all spheres has failed and continues to fail the youth in South Africa. I’m reminded of Tankiso “Lele” Mohapi, a young aspiring entrepreneur in the township of Ikageng in the City of Potchefstroom in the North West Province. Lele hopes to one day own an Arcade World for township children because of his passion for gaming. However, agencies such as the National Youth Development Agency are nothing but institutions that have squandered millions over the years, depriving the likes of Lele the opportunity to also contribute to youth development and growing the local economy.

We sadly sit with a government that continues to be shocked or worried about the state of young people in the country and yet hardly ever finds tangible solutions to deal with youth unemployment, teenage pregnancy, drug abuse etc.

The youth of 1976 indeed do deserve to be commemorated, but what is then the message to the youth of today in as far as their challenges are concerned?

It is enough with Political Sloganeering. It is enough with grandstanding events at the cost of the taxpayer. It is time for realistic and pragmatic steps in which challenges facing the Youth in South Africa will be dealt with accordingly.

What does active citizenry mean for you as an activist working with young people?

Active citizenry for me is about staying away from sentiments such as “Black child you are on your own” and owning up to the challenges facing the youth in South Africa. It is about getting rid of the mindset that voting doesn’t work and actually taking time to interrogate those seeking to occupy public office.

It is about driving a comprehensive civic education programme that will introduce government to young people, in particular the role of government as it relates to youth development.

Being an active citizen is a constitutional imperative, however, if the youth is not educated on this it serves them no purpose.

The role of municipalities ought to be interrogated accordingly as it relates to citizen participation in order to come up with programmes driven by the youth for the youth.

Nelson Mandela once highlighted the power of Sport, and how sport can contribute to nation building. Many of our sporting and recreational facilities are either in decay, have completely collapsed and just not maintained. The youth, being active and all, should play a leading role in this.

Each and every young South African should recognise that the first step to dealing with challenges is admitted that there are challenges that do exist. It is about taking responsibility for one’s future and realising that it is only through active activism that we can all begin to work towards sustainable programmes that will help get the youth involved.

Part of the concept of active citizenry is making sure that one is deliberate about exercising their democratic right to vote. Will you be voting in the upcoming Local Government Elections, and what is your reason for voting as a young person in this country?

Yes, I will be casting my vote come 27 October 2021. One of the most efficient ways to drive change is by casting you vote. It is my democratic right.

My reasons for voting are quite simple – meritocracy, honesty and pragmatism.

Do you believe that young people no longer see the point of voting? Do you think that voter apathy exists amongst young people?

It is indeed true that many of those who are registered to vote but subsequently do not do so are young people.

In order for someone to actively participate in something, they should first believe that that which they participate in is worth it. The myriad challenges that exist amongst the youth in South Africa has definitely contributed to voter apathy.

How do you encourage young people to vote in the work that you do as an MP?

When only one party had been in government for 27 years and has allowed the state of youth unemployment and other challenges to persist, how do you as an active leader begin to even package your message in a way that offers real hope? How do you begin to build a credible alternative that proves that there is light at the end of this tunnel?

Well, sadly one has to ground oneself and persist with the relevant and necessary education. The more the youth know, the better the decisions they’ll make.

Apart from voting, what kinds of responsibilities do you think young people have in protecting and upholding democratic values and principles?

I think it’s about recognising that democratic values and principles exist, without which young people linger in the periphery of ignorance. It is about making sure that they understand what accountability entails and the relevant and necessary mechanisms that are available in this regard. It is about realising that their allegiance is to South Africa and not individuals. It’s about making sure that decision-making is based on key indicators and not political sloganeering and rhetoric.

Do you feel that we have lost some of these values that you speak of?

I believe that we have. Instead of holding those elected accountable, we make excuses for them. Instead of allowing our judicial system to prosecute those who have taken thousands of opportunities from the youth, we drive hashtags in their names. Instead of taking responsibility, we pass the buck. Instead of realising that there are alternatives, we focus on who that alternative is offered by.

Why do you feel young people should be at the centre of protecting our democracy?

Well, young people are the majority in South Africa. Protecting our democracy is not only for us but for generations to come. It is imperative that there is a concerted effort in making sure that we learn from the past and why democracy may not be perfect, but why it works.

Sello Seitlholo is an MP in the National Assembly. He represents the Democratic Alliance. Read more about Sello in this MP Corner blog feature.