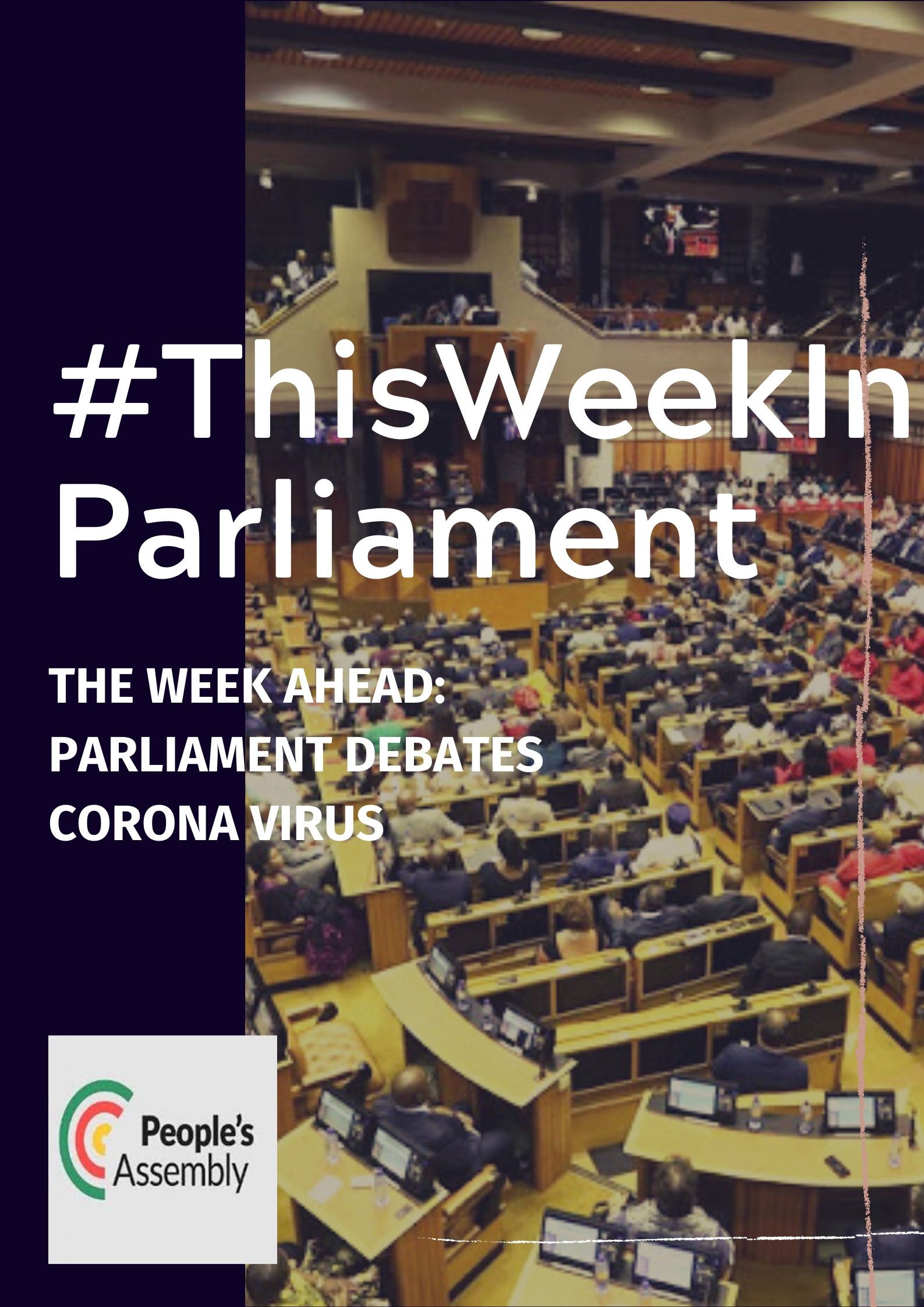 There's a full and mixed flavour to the coming week's parliamentary business.

The major points of interest will come from the Question Time sessions with the Executive, the debate on an urgent matter of national public importance and several high-profile meetings in the Committee corridor.

Government Ministers may make oral statements to Parliament to address major incidents or highlight government policies and actions. Each political party is allowed an opportunity to respond to such a statement. On Tuesday, the Minister of Higher Education, Science and Technology will make a statement in the NA chamber on the state of readiness for the 2020 academic year.

On the following day, select Ministers in the Peace and Security Cluster will be probed on a variety of issues during their Question Time session. Members of the Cabinet are accountable collectively and individually to Parliament for the exercise of their powers and the performance of their functions. They must provide Parliament with full and regular reports concerning matters under their control (read section 92 of the Constitution). Everything from big-picture policy to specific scandals and non-performance will be on the radar.

Just like the rest of the world, Parliament vibrates with concern about the coronavirus outbreak. As a result, the Speaker has scheduled an urgent debate on the coronavirus and the country’s readiness to deal with the pandemic. This follows last week’s briefing by the Chinese Consul-General to Parliament. According to the Minister of Health, 121 people have been tested for the coronavirus in South Africa and there is no confirmed case. Nevertheless, the screening of travellers at the ports of entry has intensified; the Department of Health has released a list of dedicated centres for isolation and treatment and the country remains on high alert. The debate will be lead by the DA’s Shadow Minister for Health, Siviwe Gwarube and is scheduled for Thursday.

Beyond this, legislation, Committee reports, a discussion on strengthening local government, Members’ statements, motions without notice and notices of motion are other agenda items.

Elsewhere, the NCOP chamber will sit on two days this week. The highlight will be the appearance by the leader of government business to answer oral questions. These questions are restricted to matters of national and international importance, as assigned to the Deputy President by the President. Currently, the Deputy President is responsible for, among other things, social cohesion, the moral regeneration movement, manages the interaction between the Executive and Parliament, is special envoy to South Sudan and is chairperson of the South African Aids Council and Human Resource Development Council so most of the questions touch on some of these themes.

In addition, the NCOP has arranged a two-day Committee’s Strategic Planning Session.

Away from Plein Street, public hearings on the Draft Constitution Eighteenth Amendment Bill – which seeks to amend section 25 of the Constitution – will take place in the North West and KwaZulu-Natal from Thursday to Sunday.

It’s a promising week in the Committee corridor. Everything from detailed lawmaking, to Executive scrutiny, to important spending decisions and big-picture policy will be under the microscope. Here is a rundown of the highlights:

In his February 2019 SONA, President Ramaphosa announced that the responsibility for Early Childhood Development (ECD) centres will migrate from Social Development to Basic Education, and proceed with the process towards two years of compulsory ECD for all children before they enter Grade One. Lawmakers will get an update on the migration and a briefing on tracking progress in ECD service delivery. (Tuesday)

Higher education will be getting plenty of attention this week. On the same that the Minister is making a statement in the House on the state of readiness for the 2020 academic year, three universities – UKZN, UWC and Fort Hare will brief legislators on their state of affairs. In addition, NSFAS will present on the disbursement of funding and allowances to students at these institutions. (Tuesday)

The Portfolio Committee on Cooperative Governance and Traditional Affairs will get a progress report on outcomes of forensic investigations in local government from the SIU, NPA and Hawks. (Tuesday)

Lower data cost is inching closer to becoming a reality. Last year, the Competition Commission released a report which found that data pricing was excessive and recommended that mobile operators slash prices drastically. Separately, ICASA published guidelines for the licensing of spectrum, which is set to increase competition between the major network providers and lower the cost of data. Both entities will brief MPs on the reduction of cost to communicate. (Tuesday)

After the tabling of the budget, the focus shifted to the relevant Committees – Finance and Appropriations Committees – to consider the proposals. A joint meeting has been arranged with the Parliamentary Budget Office and Financial and Fiscal Commission on the 2020 budget. (Tuesday)

MPs will get a briefing by the Public Service Commission (PSC) on the Guide on Governance Practice for Executive Authorities and Heads of Department. The PSC is of the view that if used appropriately, the Guide will contribute towards improved performance as well as effective management and governance in the Public Service. (Wednesday)

The performance of the NPA has been the subject of a lot of debate with the prosecuting body pointing to undercapacity and underfunding as the reasons for the poor results. MPs will interrogate the NPA about vacancies, its recruitment plan and how it plans to use the extra funds allocated to it in the 2020 budget. In addition, it will report back on progress in establishing and operationalising the Investigative Directorate. The Directorate will focus on the evidence that has emerged from the Zondo Commission of Inquiry into State Capture, other commissions and disciplinary inquiries. It will identify priority cases to investigate and prosecute and will recover assets identified to be the proceeds of corruption. (Wednesday)

NHI pilot projects were rolled out in 11 health districts countrywide between 2012 and 2017. Overall, the implementation of the pilot interventions had mixed success across the pilot districts. The Portfolio Committee on Health will get a briefing on the National Health Insurance Pilot Districts Evaluation Report. (Wednesday)

Parliament will hold public hearings on the 2020 Fiscal Framework and Revenue Proposals. (Wednesday)

The National Conventional Arms Control Committee will present its 2018 and 2019 Annual Reports. (Thursday)

National Treasury will respond to the public submissions on the 2020 Fiscal Framework and Revenue Proposals. (Friday)

*The programme is subject to changes so the schedule needs to be checked daily for accuracy.