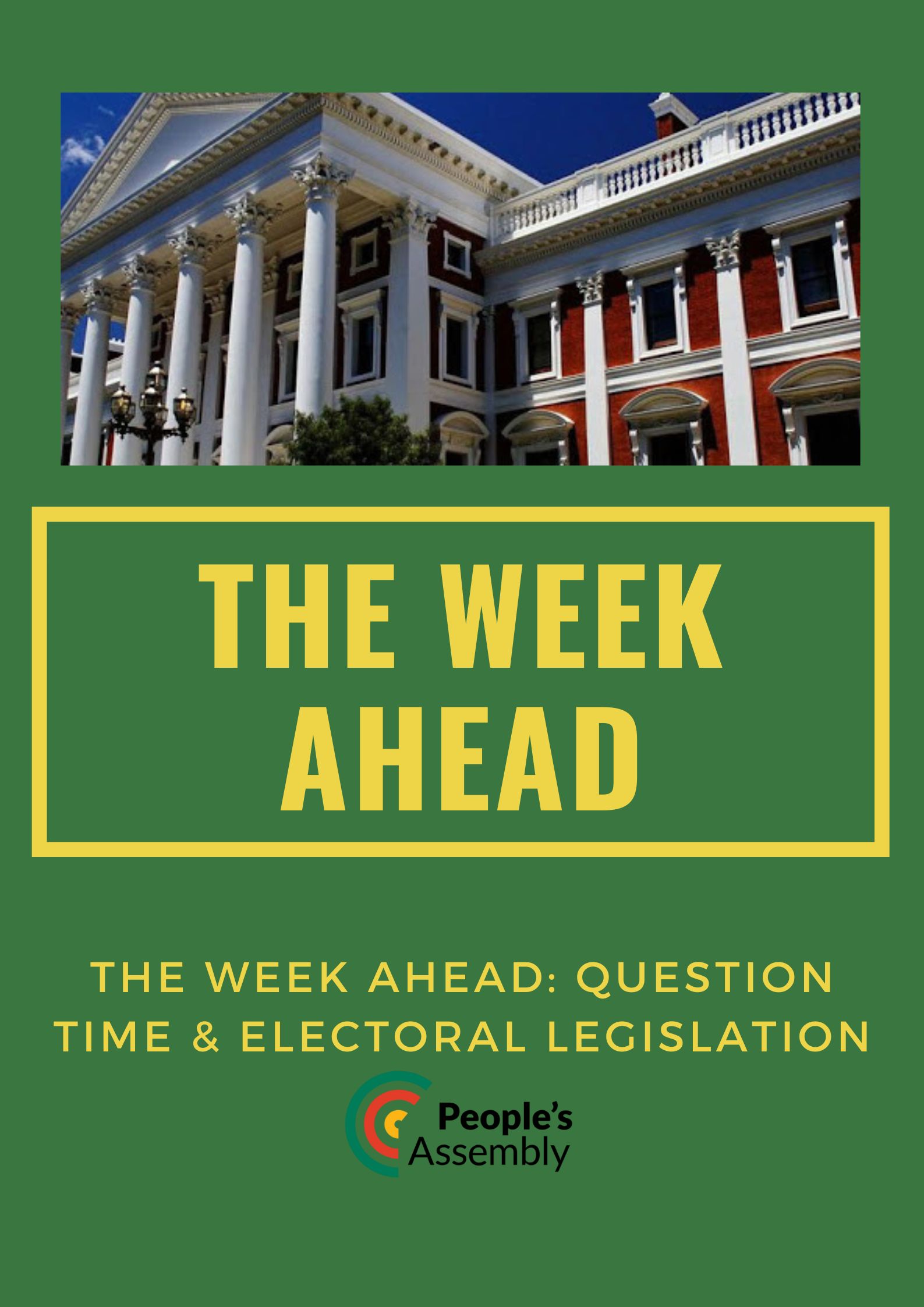 The practice of oral questions is an established part of the parliamentary day and gives MPs an opportunity to question the Executive about matters for which they are responsible. For all its limitations, this is usually an occasion of heightened interest. Everything from specific scandals and programmes to big-picture policy and performance are under the microscope. Generally, governing party MPs and the opposition have different objectives when it comes to these engagements; the former tends to provide Ministers with an opportunity to put government policies and actions in a favourable light while the latter aims to do the opposite.

The NCOP has set aside two days for Question Time.

The Deputy President will respond to oral questions on Thursday.

Meanwhile, select Ministers in the social services cluster will respond to oral questions on Tuesday.

Elsewhere, there is only one agenda item scheduled for Wednesday’s National Assembly sitting: consideration of the Electoral Amendment Bill.

Parliament is in a rush to pass this bill. In April, the Constitutional Court – following an application from Parliament - extended the deadline to finalise the bill from 10 June 2022 to 10 December 2022. This was to give Parliament sufficient time to properly deliberate on the Bill and to ensure that citizens across the country are afforded an opportunity to meaningfully participate and share their views on the Bill. If approved, the NCOP will have less than two months to conclude its work.

It's another big week in the Committee corridor where lawmakers will be dealing with leftover Annual Reports and finalising Budgetary Review and Recommendations Reports (BRRRs) which must be completed before the Medium-Term Budget Policy Statement on 26 October. The Auditor-General has advised committees to monitor the accountability ecosystem to ensure that all role players/assurance providers effectively exercise their roles to improve audit outcomes and ensure service delivery is provided by the portfolio.

Following their tabling in the National Assembly, the BRRRs are submitted to the Minister of Finance and the relevant Minister responsible for the function (vote). Upon delivery of the main Budget in February next year, the Minister of Finance is required to explain how the budget gives effect to these recommendations from Parliament, or why they have not been taken into account.

On the sidelines, Parliament will – on Thursday - host a virtual round-table discussion themed The Climate Change Emergency - A South African Response (What role should Parliament play in the climate change emergency response?).

The Committee Corridor is the site for many interesting meetings. Below are the highlights:

Standing Committee on Finance, (National Assembly), [Briefing by the Auditor-General (AG) on Audit Outcomes of National Treasury and its entities], Virtual Meeting Platform, 15:00-18:00

Subcommittee on the Review of the National Assembly Rules, [Consideration of matters referred by the Rules Committee and member’s submissions], Virtual Meeting Platform, 09:30-12:30

Committees provide a platform for the public to present views directly to MPs. Share your thoughts, on-the-ground experience and expert information to the relevant committees. Critically, what questions should MPs pose to the Executive as they conduct their oversight work? Write to a Parliamentary Committee

This summary is based on the schedule as it is published on Monday morning. The programme is subject to frequent updating so the link above needs to be checked daily to confirm the programme for the day.