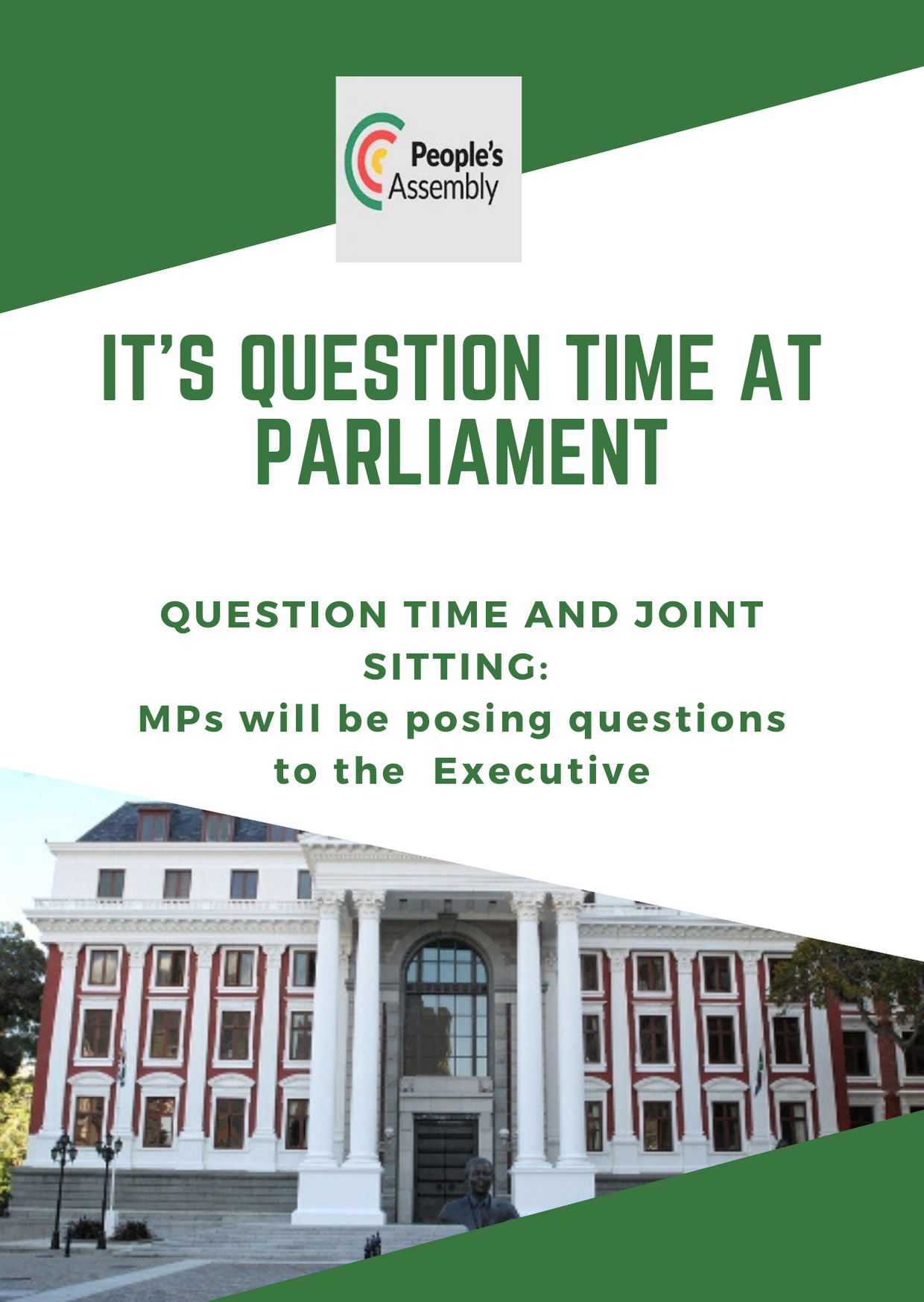 And just like that, it’s the penultimate week of the first term.

Question Time is the main business in the National Assembly (NA) chamber this week. The practice of oral questions is an established part of the parliamentary day and gives Members of Parliament (MPs) an opportunity to question the Executive about matters for which they are responsible.

Everything from specific scandals and programmes to big-picture policy to bread-and-butter issues and performance will be under the microscope. In practice, Question Time serves different objectives for governing party MPs and the opposition. In the case of the former, their questions are designed to give Ministers an opportunity to discuss the virtues of government policy. For the latter, it is a chance to confront the government for its actions and to highlight perceived inadequacies.

For all its limitations, this is usually an occasion of heightened interest and can sometimes be revealing.

In the National Assembly, the Deputy President will answer six main questions plus follow-up questions. Two of the standout questions are about Eskom and the coronavirus. Read the questions here

Meanwhile, select Ministers in the social services cluster will respond to the following questions

Beyond this, lawmakers will consider the Report on the 2020 Fiscal Framework and Revenue Proposals, legislation and statutory instruments.

Also dotting the agenda are regular items like assorted Committee Reports, Members’ Statements, Motions without Notice and Notices of Motion.

Elsewhere, the National Council of Parliament's (NCOP) plenary agenda has a familiar pattern: it includes motions, debates, legislation and Committee Reports. It will also consider the 2020 Fiscal Framework and Revenue Proposals.

Parliament has scheduled a joint sitting to debate tuberculosis. TB is the leading cause of death in South Africa. To underscore how serious Parliament takes this issue, it has established a South African Chapter of the Global TB Caucus as a platform for Members of Parliament to champion the response to TB in their constituencies and drive political action to end the disease.

Away from Plein Street, the pace is quickening as far as work of the Ad Hoc Committee to initiate and Introduce Legislation Amending Section 25 of the Constitution is concerned. With four provinces covered, public hearings on the Draft Constitution Eighteenth Amendment Bill shift to the Eastern Cape and Gauteng from Thursday to Sunday.

The Committee corridor is the site of several important meetings. Here is a rundown of the highlights:

Last week, the police enforced a court order allowing the City of Cape Town to remove refugees living in Green Market Square. The refugees were camping there since October last year and hoped to be resettled to a third country, citing fears of xenophobia. The impasse between the City of Cape Town and the refugees continues as they are now occupying another part of the city and are breaking by-laws. The current order makes provision for the city to provide temporary accommodation but it has limited capacity. Last week, the Chairperson of the Home Affairs Committee said: “If the refugees do not want to adhere to the international law and they do not want to adhere to the constitution and the laws of the Republic, we are of the view that they will have to be taken back to their homes.” The Committee has called all stakeholders to discuss this matter. (Tuesday)

MPs will get an update from the Department of Basic Education on the Programmes for Improving the Foundational Skills of Literacy and Numeracy. Various external reports have highlighted the shocking levels of numeracy and literacy in the country’s classrooms. Earlier this year, the President said: “Our immediate task as government is to improve the foundational skills of literacy and numeracy, especially reading for meaning. It is for this reason that reading for meaning has now been declared an apex priority”. According to the Human Science Research Council (HSRC), learners whose parents reported spending time with them on early literacy and numeracy activities had higher achievement. (Tuesday)

Lawmakers will be briefed by the Department of Public Works and the South African Police Service on the state of Parliamentary Villages. Last year, MPs heard that the last maintenance that was done at the Parliamentary Villages was between 2006 and 2009. Also, numerous complaints about the conditions of the residences had been received since the Fifth Parliament. A decision had been taken to fast-track the maintenance project (Tuesday).

The National Lotteries Commission will be in the spotlight when It briefs MPs on the distribution of funds and quarterly performance. The Commission is at loggerheads with Ground Up for its reports questioning some of its grant allocations. We can expect MPs to probe some of the allegations during the engagement. (Tuesday)

Icasa is finalising regulations into Sports Broadcasting. According to the regulator, the aim is to ensure that South Africans have access to a wide range of national sporting events and further reflect and give exposure to minority and developmental sport. However, it has proven to be highly contentious with sporting bodies opposing the regulations and warning about the potential negative impact on their finances. (Tuesday)

Last year, the Competition Commission released the Health Market Inquiry Final Findings and Recommendations Report. It found that the South African private healthcare market is “characterised by high and rising costs of healthcare and medical scheme cover, and significant overutilization without stakeholders having been able to demonstrate associated improvements in health outcomes”. Legislators will be briefed on the report. (Wednesday)

The Select Committee on Education and Technology, Sports, Arts and Culture will hear from the National Student Financial Aid Scheme (NSFAS) on the funding process and Student Funding Status in Universities and Technical and Vocational Education and Training(TVET) Colleges for the 2020 Academic year. Addressing the National Assembly last week, the Minister indicated that the government will be spending R35bn in 2020 through NSFAS, supporting over 700 000 students in both universities and TVET colleges. (Wednesday)

Other noteworthy agendas include a discussion on religious practices; the Cyber Warfare Policy Framework and measures to ensure compliance with local content requirements and the verification thereof. (Wednesday)

The Subcommittee on Correctional Services will discuss the parole system: challenges, successes, and recommendations in the Parole System as a whole and on pending parole for high profile inmates (including statistics). Spurred on by a recent incident, the Minister convened an urgent meeting with high-ranking officials to address the systemic flaws in the parole system. One of the revelations was that parole boards are given “flawed” data when determining if a prisoner should be eligible for parole. (Friday)