The Week Ahead: Routine Business in the Main Chambers and Committee-Land 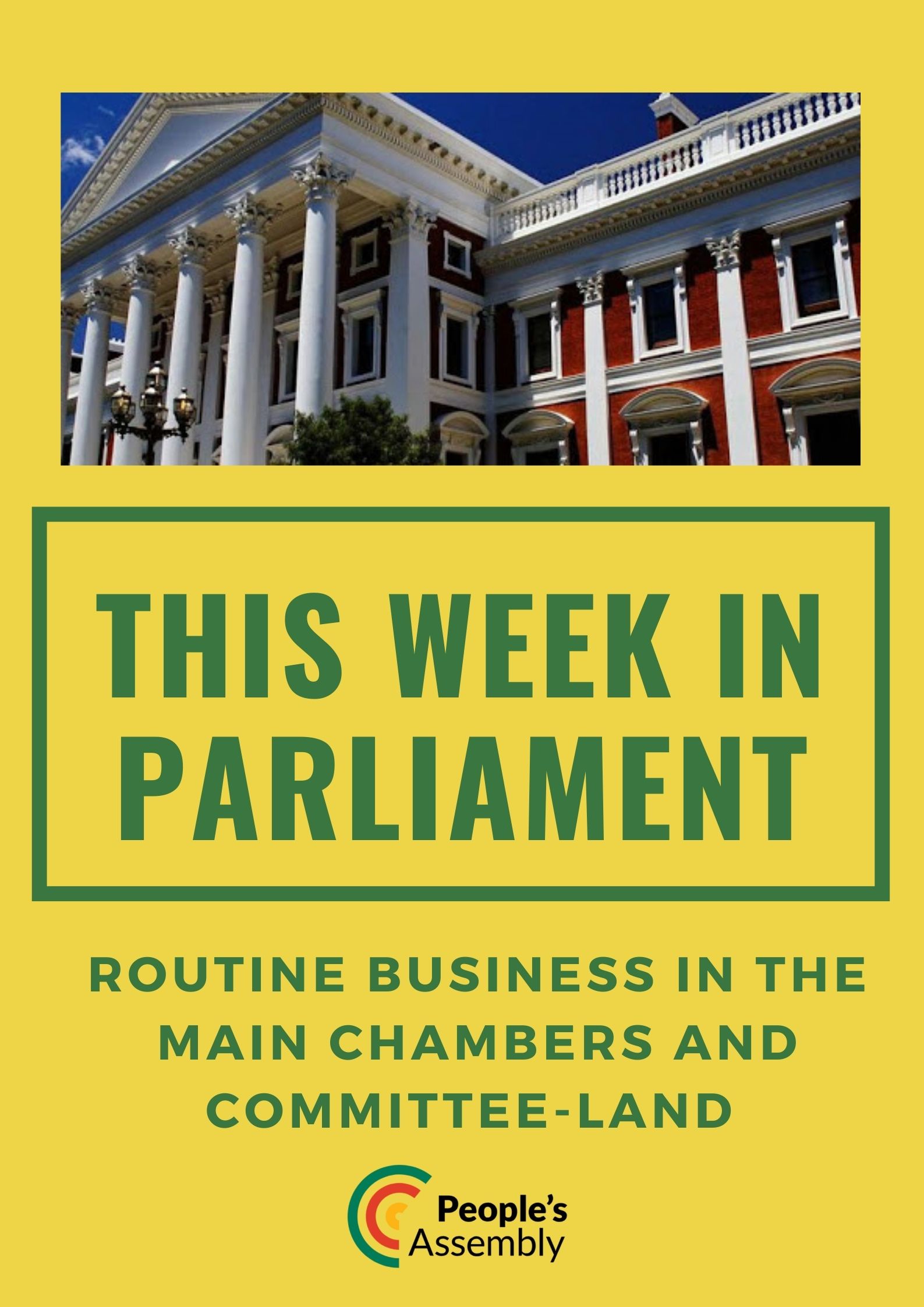 There are four weeks left until Parliament’s mid-year constituency period.

Both chambers have scheduled sittings from Tuesday to Thursday.

On Wednesday, the NCOP has prioritised 3 policy debates: Cooperative Governance, Traditional Affairs and Health. The NA will consider assorted committee reports including the South African Human Rights Commission's Report on the Investigative Hearing (held in North West) into the lack of Safety and Security Measures in Schools for Children with Disabilities in South Africa.

On Thursday, the NCOP has prioritised the following policy debates: Police, Civilian Secretariat for the Police Service, Independent Police Investigative Directorate and Higher Education and Training. The NA will consider the National Health Amendment Bill and the Disaster Management Amendment Bill.

One item that could be added suddenly to the Order Paper in both chambers is the motion to approve the new Secretary to Parliament from 1 June. This motion was supposed to be considered by both Houses last Wednesday but was deferred pending discussions on Tuesday.

The week rounds off with NCOP delegates discussing the Women's Charter for Accelerated Development Report Back Session in KwaZulu-Natal.

The Ad-Hoc Joint Committee on Flood Disaster Relief and Recovery will wrap up its oversight visit to KZN on Monday. It has scheduled a series of engagements with relevant stakeholders and a planned oversight visit to the areas affected by the floods.

Below is a rundown of the highlights in the Committee Corridor:

Portfolio Committee on Home Affairs, (National Assembly), [Consideration of the Motion of Desirability (MOD) on the Electoral Amendment Bill; Consideration of CVs and the report from the Office of the Chief Justice to fill a vacancy of an IEC Commissioner; Briefing by the Minister of Home Affairs on the report of the Investigation within the Government Printing Works (GPW) on the loss of financial data and loss of Curriculum Vitaes (CVs) as well as investigations by Hawks on the allegations of corruption levelled against the Chief Executive Officer of GPW], Virtual Meeting Platform, 08:30-13:00]

Portfolio Committee on Communications, (National Assembly), [Briefing by SAPO on: (i) establishment of the Oversight Team, (ii) implementation of turnaround strategy (iii) labour issues, (iv) improving cashflows; and (v) report back on the malpractice at Jansenville Post Office; Briefing by SAPO on its 2020-21 Annual Report; Briefing on the South African Postbank Bill [B12-2022] Virtual Meeting Platform, 09:00-13:00

Standing Committee on Public Accounts, (National Assembly), [Update by Presidency on all reports referred by the SIU – how they have been processed, and DG Public Works DC], Virtual Meeting Platform, 09:30-12:30

Portfolio Committee on Public Works and Infrastructure, (National Assembly), [Presentation by the Parliamentary Legal Adviser and State Law Adviser on the A-List of the Expropriation Bill [B23-2020]; Consideration and adoption of minutes of the previous meeting], 09:00-12:00

Portfolio Committee on Police, (National Assembly), [Findings of the SAPS Organisational Climate Survey, including issues of promotions and psychological support to members; Briefing by the Minister of Police on Crime Statistics for Fourth Quarter of 2021/22 Financial year (January to March 2022)], Virtual Meeting Platform, 09:00-13:00

Portfolio Committee on Health, (National Assembly), [Clause by clause deliberations on the National Health Insurance (NHI) Bill; Consideration and adoption of minutes], Venue to be confirmed, 09:30-13:00

Select Committee on Transport, Public Service and Administration, Public Works and Infrastructure, (National Council of Provinces), [Briefing by the Department of Transport on the progress report to date on the roll-out of the integrated public transport network (IPTN) and reasons for the delays by some municipalities to achieve the IPTN project objectives], Virtual Meeting Platform, 10:00-13:00

Committees provide a platform for the public to present views directly to MPs. Share your thoughts, on the ground experience and expert information to the relevant committees. Critically, what questions should MPs pose to the Executive as they conduct their oversight work? Write to a Parliamentary Committee