THIS WEEK IN PARLIAMENT: EXTENSION OF TERM TWO 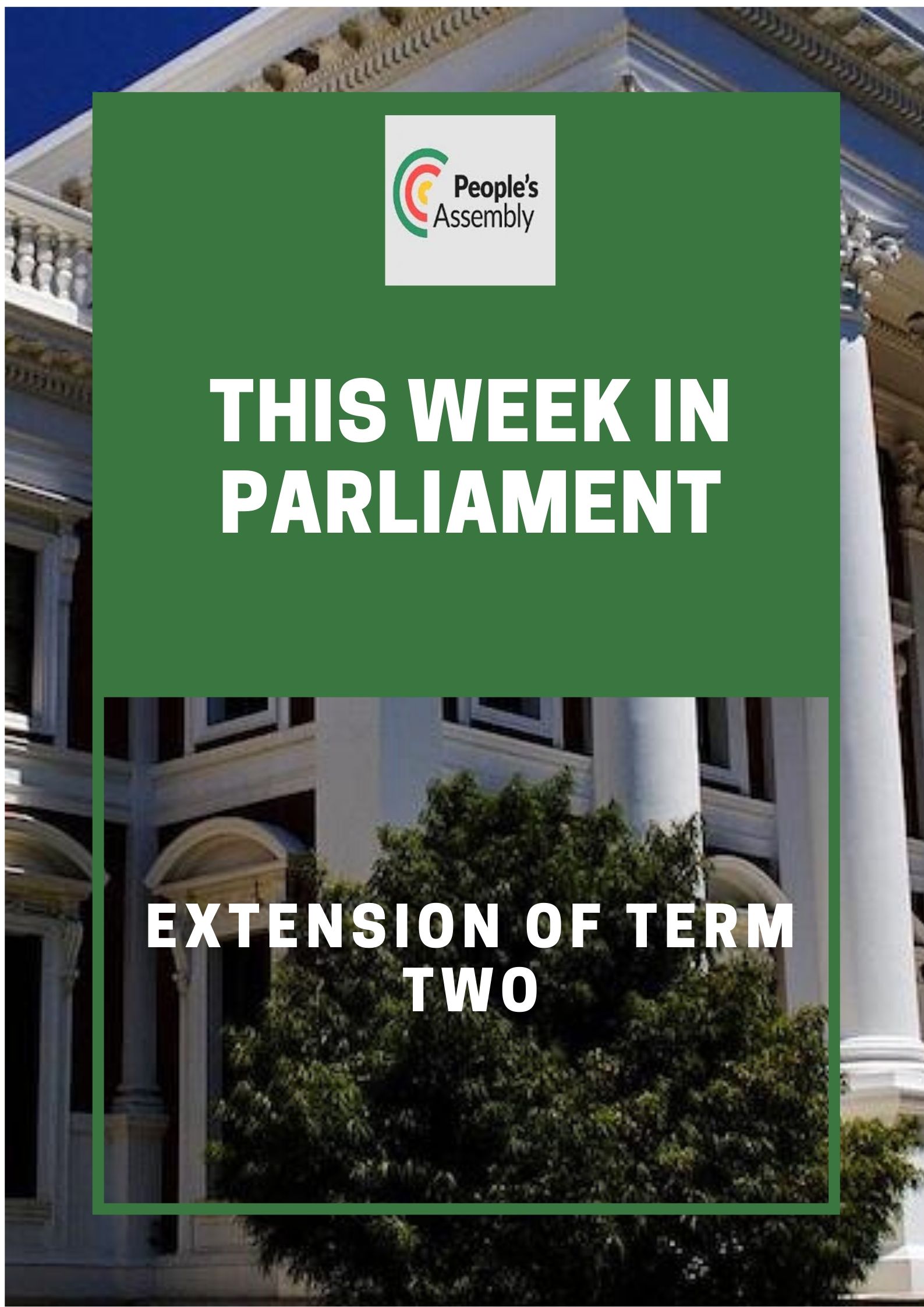 Following last week’s tabling of the emergency budget, Parliament has had to reconsider its July recess period. This will have knock-on effect on the Legislature’s programme for the rest of the year.

Speaking at the National Assembly Programming Committee meeting last Thursday, House Chairperson Frolick explained that some departments had significant changes to their budgets: 7 budget votes were revised upwards, and substantially so, including social development. 31 budget votes were affected downwards and 13 of those were substantial, about half a billion Rand.

Where there has been a revision in the budget vote, this will be referred to the relevant Portfolio Committee for processing so that they can exercise the necessary oversight and interact with the Executive and the Accounting Authorities to oversee the impact of the budget on the Strategic Plan of the respective Department.

Frolick indicated that all votes with substantial changes will be debated in mini plenaries. Members would have further time to interrogate the Executive when Parliament finally passes the adjusted budget votes. Usually the adjusted appropriations are not referred to Committees but due to the huge changes in the budget of the some departments owing to the COVID19 emergency budget, it is “business unusual”.

On Tuesday, the National Assembly will debate a matter of national public importance: the scourge of gender-based violence against women and femicide. The debate is sponsored by the EFF’s Veronica Mente. The country has experienced a devastating surge in gender-based violence and femicide under lockdown level three. President Ramaphosa said that GBV should be considered a second pandemic in the country.

Legislators will consider a motion to revive the Ad Hoc Committee amending Section 25 of Constitution. The Committee’s mandate lapsed at the end of May before it could finalise its work. Due to COVID-19, the Committee was not able to conclude its public hearings.

Beyond this, the NA will consider a report determining the remuneration of the Public Protector and Commissioners of the SA Human Rights Commission. Two weeks ago, the Justice Committee approved the salary increases for office bearers in these institutions earning up to R1.5m per annum. This is the first time Parliament approves the increase of remuneration of independent constitutional institutions as it was previously only done by the Executive. A change occurred when there was an amendment to the Independent Commission for the Remuneration of Public Office Bearers Act, which came into effect in the past financial year, and provided that the Commission must now make recommendations to the President, who would then get approval from the National Assembly.

On the same day, Ministers in the Peace and Security Cluster will be probed on a variety of issues during their Question Time session in the NCOP. Members of the Cabinet are accountable collectively and individually to Parliament for the exercise of their powers and the performance of their functions. Everything from big-picture policy to specific scandals and non-performance will be on the radar (see here and here)

While Committees are still busy preparing their programmes (they have been advised that the focus should be on the emergency budget and the other business should be kept to a minimum), some have already scheduled their meetings.

The Finance and Appropriations Committees have already begin processing the budget. On Tuesday, the joint committees will be briefed on Tuesday by the Parliamentary Budget Office and Financial and Fiscal Commission on the 2020 revised fiscal framework. On Wednesday, the Committees public hearings on the supplementary budget will take place and Treasury will respond on Friday. You can submit comments on the special adjustment budget here.

Also on Tuesday, the Portfolio Committee on Justice will receive a progress report by the SIU on matters concerning the Department of Justice and mechanisms to facilitate cooperation between the SIU and the NPA. In February, the Minister of Justice temporarily shut the masters’ offices across the country as part of an investigation into allegations of maladministration, corruption and fraud, authorised by President Ramaphosa. The SIU conducted search and seizure operations in this regard.

The Committee will also be briefed on the operationalisation of the Protection of Information Act and capacitation/resourcing of the Information Regulator in preparation for the transfer of powers and functions to the Regulator. POPIA was signed by former President Zuma on 19 November 2013 and will come into operation on 1 July 2020. The purpose of the law is to ensure all South African institutions conduct themselves in a responsible manner when collecting, processing, storing and sharing another entity's personal information by holding them accountable should they abuse or compromise personal information in any way.

The impact of COVID-19 on schools will be in the spotlight when MPs are provided an update on COVID-19 School Compliance measures, challenges and mitigations.