Everything You Need To Know About Municipal Budgets 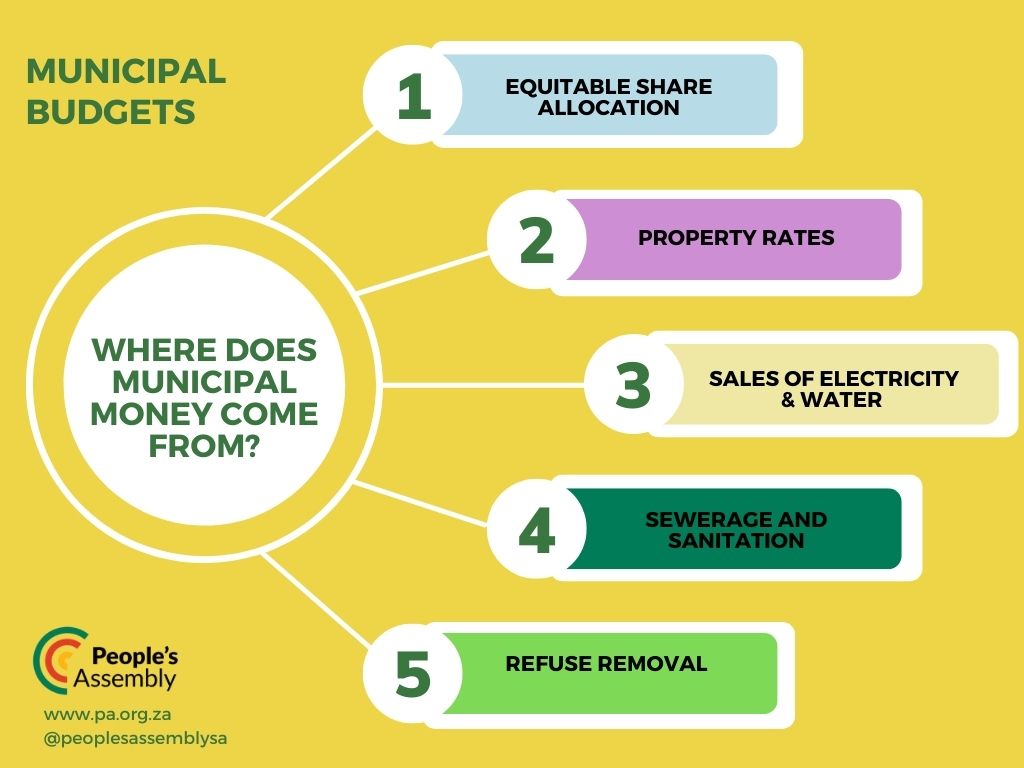 What are Municipal Budgets?

Budgets are financial plans for the upcoming year that show the forecasted expenditure and income for the municipality. The budgets determine how public resources from the National Revenue Fund will be utilised to perform service delivery obligations and provide for the municipality’s needs.

The municipal budget cycle begins on the 1st of July and ends on the 30th of June in the following year. Budgets need to be prepared and approved for each financial year. At the close of the financial year, reporting against the approved or adjusted (if any) budget is required in the form of Annual Financial Statements and an Annual report. Council must approve these budgets before the new financial year begins, after proper planning and consultation with ward committees and other stakeholder groups in the area.

What Does the Budget Contain?

There are two aspects to the budget. The first is the operating budget, and the second is the capital budget. The operating budget is used to fund the day-to-day, short-term costs of the municipality. For example, short term costs constitute the kind of expenses that are done annually, including the bulk purchase of water and electricity, infrastructure maintenance and repair, and general municipal maintenance.

The capital budget goes toward planned expenditure on foundational service delivery costs. These are large expenses on long-term purchases and investments such as the purchase of land, the construction of roads, recreational facilities, public clinics and libraries and more. Capital purchases are expected to have life expectancies longer than one year, while operating expenses are temporary.

What Are the Sources of Municipal Income?

The resources for these budgets come from a wide range of sources. A large portion of the capital budget comes from direct charges against the National Revenue Fund, as well as governmental grants, internal and external loans, donations, public contributions and public or private partnerships. The operating budget is sourced from a combination of the municipality’s public charges and the equitable share allocation. For example, public charges include property rates, tariffs on water and electricity, refuse removal, sewerage and sanitation and fines.

The equitable share refers to the portion of the National Revenue Fund that is divided and allocated to each municipality for public spending. This money supplements the revenue raised by municipalities from rates and taxes. You can find a summary of the formula and data used in 2022 here.

The Constitutions states that all national revenue should be divided equitably between the three spheres of government (national, provincial and local), based on each sphere’s mandates and responsibilities. The equitable divisions are stipulated in an annual Division of Revenue Act. For example, this year, the DIvision of Revenue Act was signed in June 2022.

Another two pieces of important legislation that are necessary for the practical application and management of the Equitable Share Allocation, are the Municipal Finance Management Act 56 of 2003 (MFMA) and the The Division of Revenue Bill (DoRB). The MFMA contains the rules and regulations for financial management in local government.

The DoRB determines the exact equitable shares and how it will be transferred. Chapter 2, Section 5 of the DoRB states that, “(3) The national department responsible for local government must transfer a municipality’s equitable share… to the primary bank account of the municipality in three transfers on 6 July 2022, 7 December 2022 and 15 March 2023, in the amounts determined in terms of section 22(2)”.

How Are Municipal Budgets Compiled?

Municipal budgets are drafted before the 1st of July so that there is time to approve and adjust the budget before it is finalised and implemented. During March, most municipalities prepare their budget for the approaching financial year by consulting with ward councillors, ward committees and other community groups or stakeholders. During this stage, members of the municipality are encouraged to observe the council meetings and budget debates so that they can make comments and stay informed of their municipality’s agenda. By participating in these discussions, community members and organisations can lobby for municipal priorities to be realigned, or for allocations to be readjusted to favour public needs.

How Can I Access the Budgets for Metropolitan Municipalities?

You can find links to the 8 metropolitan municipalities’ budgets below:

The financial health of a municipality - that is, its ability to effectively monitor, predict and report on spending in alignment with their forecasted budget - is incredibly important. Municipal spending has a direct impact on citizens’ everyday lives. With rising tarrif increases on rates, citizens should be more involved in their municipalities to ensure that their money is being well-spent on operating or capital costs. The budget determines spending priorities with regards to water, electricity and facilities, so citizens should comment on their municipalities budgets before they are finalised. Alternatively, citizens can also monitor the municipalities spending after budget finalisation by reading the Auditor General’s yearly reports, and using it to justify proposed changes in the following financial year’s budget. In doing so, municipal residents can contribute to the improvement of local facilities for the good of their immediate communities.

Equitable Shares and Allocation of Revenues