Petitions: How to get your voice heard in Parliament

In South Africa, Section 17 of the Constitution creates the right for everyone to present petitions. Public participation in law-making, oversight and other processes of Parliament, therefore, is an integral part of our democracy. Parliament has developed a number of ways to promote public involvement in the work of the institution. One of these ways is by submitting a petition.

A petition is a written complaint or request to Parliament or a provincial legislature seeking its intervention or assistance. In today’s complex society with a diverse set of issues, it is also used as a means of strengthening democracy, by ensuring that members of the public are included in governance structures and are involved in every decision taken in the chambers.

There are mainly two types of petitions. The first type is a public petition, this is when a group of people requests intervention or assistance on specific issues and grievances. The second type is the special petition, where there is a specific plea from an individual requesting that the state address a personal grievance. More recently, however, with the advent of the internet, there is an additional type of petition that is being used more frequently to drive some of the mass movements and campaigns we are seeing today. These are known as online petitions or e-petitions, they are a form of petition which is signed online, usually through a form on a website.

How do you submit a petition? 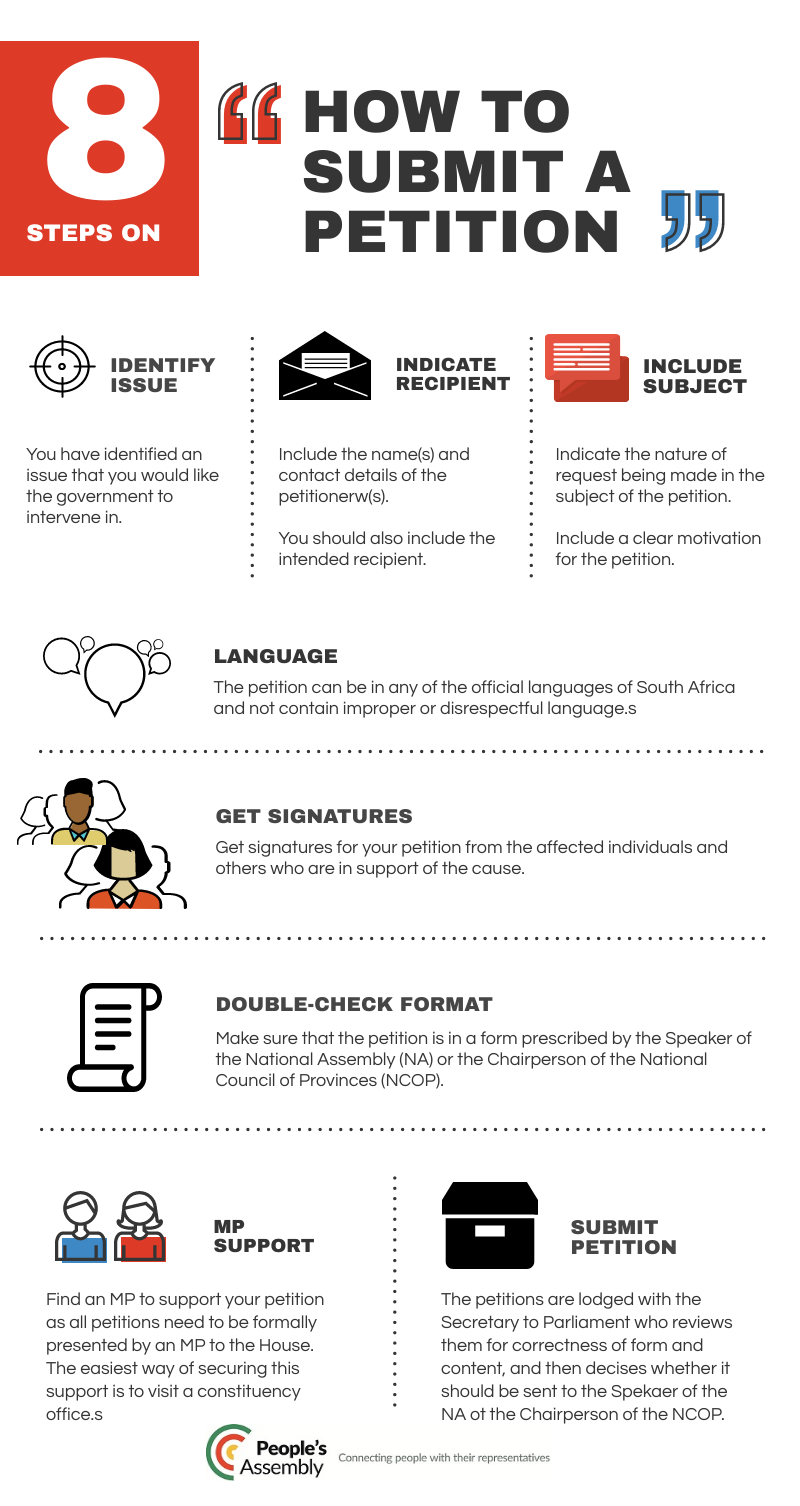 Petitions are representative of how people feel about certain issues, long after the voting has happened. Signing a petition has become part and parcel of protesting politics and fighting injustices. Although adding your signature to a cause has become a stalwart of modern protests how do you translate such mammoth support into meaningful change?

Supporters of petitions believe that they help build awareness around a specific issue. As signatures accumulate and a strong, united voice is formed, the media may even catch on and help bring the matter to the attention of even more people. Surely, it’s not that easy to ignore 100 000 signatures right? Not necessarily.

Early this year more than six million people in the UK signed a petition calling on the government to stop Brexit by revoking Article 50. That petition was representative of approximately 10% of the UK’s population, nevertheless, the government still rejected this petition and ruled out canceling Brexit. On the other hand, here in South Africa, it was the 600 000 plus signatures on various petitions against gender-based violence that led to the mass mobilization of people across the country in the month of August following the murder of UCT student Uyinene Mretyana. This on the background of the Gender-based violence Summit in the Presidency, led by the #TotalShutdown Movement and the much recent #SandtonShutdown, led by the Black Womxn Caucus. The outcomes of these campaigns are yet to unfold. However, petitions are an effective way of raising awareness or showing discontent and ensuring that the adoption of public demands into policy remains subject to the usual political process.

As it stands, dealing with petitions is the lowest priority item in the ordering of parliamentary business. Delays in processing petitions remain a concern. The lack of public awareness around the petitions process and the non-attendance of key stakeholders at hearings plagues on. Petitions submitted need to be specific and dodge party political issues to avoid being derailed in parliament.

In addition to this, though many might argue that petitions are instrumental in raising awareness, they arguably also allow people to feel as though they have taken action when they haven't, potentially preventing individuals from pursuing more hands-on activism.

Constituency offices are under-utilized. These offices play an integral role in assisting the public to bring petitions before the relevant Parliamentary committee, and thus greater public awareness around the role of these offices must be prioritized.

In conclusion, whether a petition achieves a change in policy should not be the main question. The key starting point is whether it raises awareness of the issue and whether it raises the profile of a specific issue enough to lead the government to eventually agree for a change. People should remain cognizant that the impacts of petitions can stretch beyond immediate results. Changing policy is a messy process, and achieving change often requires long and convoluted processes of campaigning combined with moments of exerting pressure at the right time. Whether they work to create legislative change, or just raise awareness of an issue, there’s some merit to signing them. Even if nothing happens immediately, petitions are one of many ways we can help build long-term change. Visit the Petitions page on People’s Assembly to read up more on petitions.