How Are SCOPA Chairpersons Elected Nationally and Provincially? 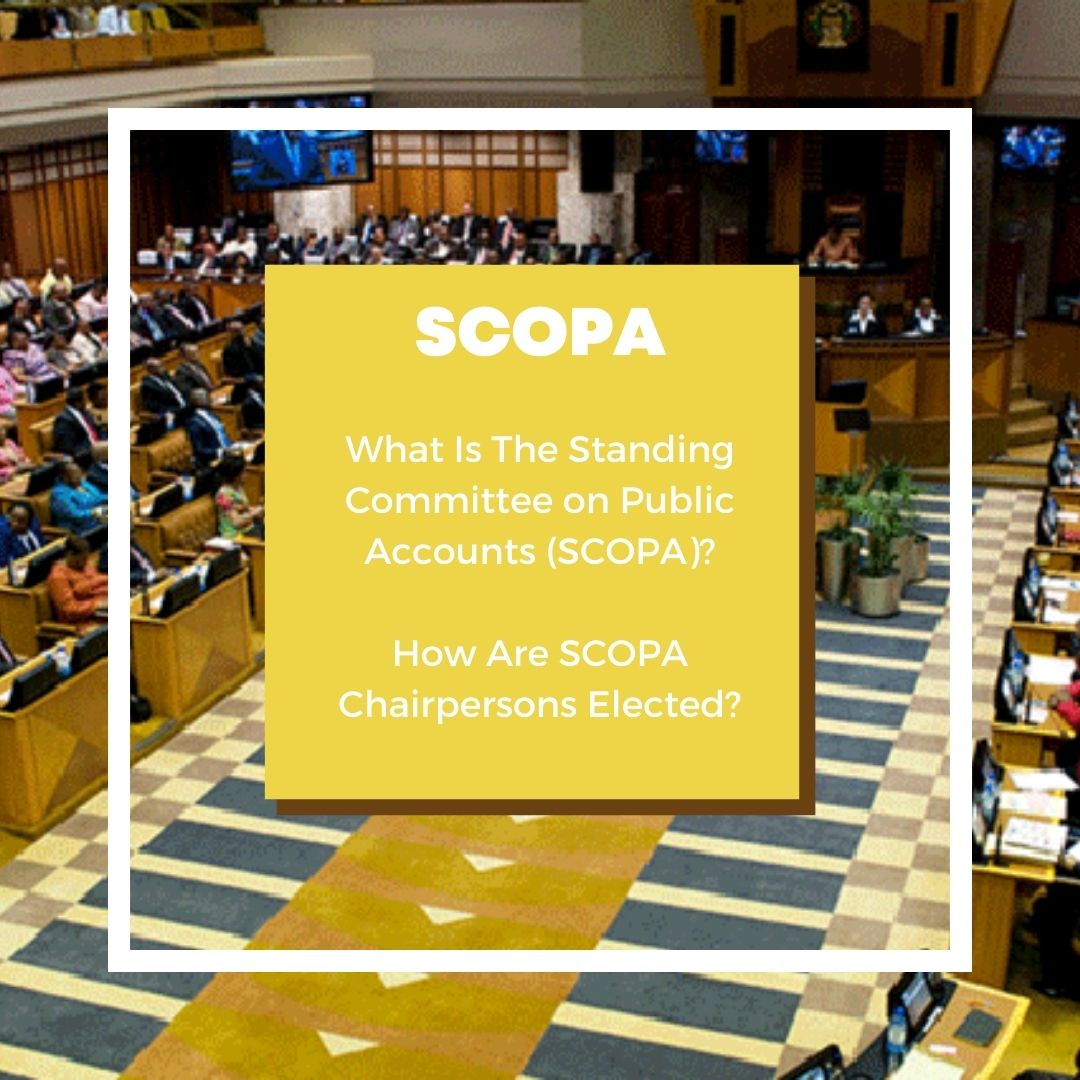 What Is The Standing Committee on Public Accounts (SCOPA)?

The Standing Committee on Public Accounts (SCOPA) is a Legislature Committee that acts as Parliament’s watchdog over the financial expenditure of the Executive. It audits reports, internal audits, forensic reports and any other documents issued by the Auditor-General, as well as any other financial statements referred to them. When necessary, SCOPA is able to initiate investigations, and is empowered to call on governmental heads to account for expenditure of public funds. If SCOPA deems it necessary, it can also recommend that the National Assembly enforces punitive measures in issues of financial corruption.
To follow this Committee and see what it does, check: SCOPA

How Are SCOPA Chairpersons Elected?

At a national level, Parliament follows the Westminster practice with regards to electing a member of the opposition party to chair the Public Accounts Committee. Below is a list of all the SCOPA Chairpersons to date.

Each provincial legislature also has a SCOPA to oversee the financial expenditure of the respective provincial Executive. Interestingly, the practice of electing a member of the opposition party to chair the Public Accounts Committee has not been fully adopted at provincial level.

Only in the Western Cape, where the Democratic Alliance is the ruling party, has an opposition party member been chosen to chair SCOPA. In the 8 other Provinces, a member of the ruling party, the ANC, chairs the watchdog committee.

Below is a list of each of the Provincial Legislature’s elected SCOPA Chairpersons.

We have conducted an Interview with Simon Dioke Magolego, Senior Committee Coordinator: SCOPA to discuss the practices for electing a SCOPA Chairperson, and what these practices mean for effective oversight and accountability.

1. Is there a precedent set in the Western Cape where they have historically chosen ANC members to chair SCOPA, or was this a new tactic only employed in 2019?

It is a precedent set up by the Western Cape Provincial Parliament as this has never happened since 1994. The practice of SCOPA being Chaired by an opposition member has been practised by the National Parliament only.

2. Is there an existing rule or practice that states that Provincial Legislatures should pick opposition party members to chair SCOPA?

There is no existing rule or practice that states that Provincial Legislatures should nominate an opposition member to chair SCOPA.

3. In the national Parliament, the ANC has picked an IFP member to chair SCOPA. However, in the provincial parliament, they have only selected ANC members as SCOPA chairpersons. Is there a different practice nationally versus provincially? If so, which specific rule determines this?

It is an ANC practice in the National Parliament to appoint the Chairperson of SCOPA from an opposition party. However, it is not using the same practice to appoint Chairpersons at Provincial Legislatures. There is no specific rule that determines this.

4. Are there international jurisdictions where it is traditional to pick SCOPA chairpersons from opposing parties?

5. What are the advantages of picking an opposing party member to chair SCOPA?

Appointing the opposition to the leadership position of the Chairperson of SCOPA is seen as balancing the power between the ruling party and the opposition, as well as ensuring that SCOPA provides meaningful opportunities for the Opposition to participate in effective oversight of government expenditures.

In addition to having a chairperson from the opposition, other considerations should include the calibre, skills and competencies of the Chairperson. Like with any other organisation or institution, the likelihood of success of a PAC depends on strong and knowledgeable leadership. It is desirable that the SCOPA Chairpersons have leadership qualities that are core in enhancing the effectiveness of the SCOPA.

1. What are the advantages of having an opposition member chair SCOPA?

Having an opposition member leading SCOPA has obvious advantages. The Chair is not immediately constrained by narrow party considerations, especially the instinct to defend or avoid embarrassing their own party’s Minister. It also makes officials’ work more difficult in preparing for meetings, in the knowledge that the Chair will not instinctively be inclined to cover up a bit for them. Overfamiliarity and political seniority can be a hindrance if the Chair and government are from the same party. An opposition Chair is immune from the internal party backlash, and is readily available to communicate messages to the public via the media.

2. The practice of electing opposition members does not seem to have been adopted in the Provincial Legislatures. Why do you think this is the case, and should it change?

It seems the majority party has no policy on this. For the same reasons, it would help to up the tempo on accountability, especially with provincial legislatures being dense with corruption.

3. What can other parliamentary committees learn from the way the national Parliament’s SCOPA operates?

The unity in action of the Committee subordinates, to a large extent, partisan approaches to oversight. The camaraderie that existed in the SCOPA Committee was exemplary and deserves emulation. During questioning no one could distinguish between opposition and majority party Members of Parliament.

Paying attention to details ensured that officials prepared themselves better than they normally do. I have heard tales from officials who upon being called to SCOPA went through their annual reports like they were preparing for exams. We got reports and asked questions, and there was no time for long-winded stories. This helped SCOPA to get to the core of the issue, instead of focusing on generalised statements without precise meaning. This approach, however, means that Committee members MUST read and prepare for meetings, supplementing their work with research in order to engage intelligently.

It is my personal view that having SCOPA alone being chaired by the opposition is not enough, and doesn't fully achieve its intended function as the guardian of the public purse. I think if the Standing Committee on Appropriations (SCOA) was in the opposition’s hands, then we can say there is full oversight on public funds at the same level. SCOPA and SCOA, in my view, are two sides of the same coin. The one guards current expenditure, whereas the other focuses on reviewing expenditure. Surely, there should be a lot of notes exchanged between these two Committees on financial management.