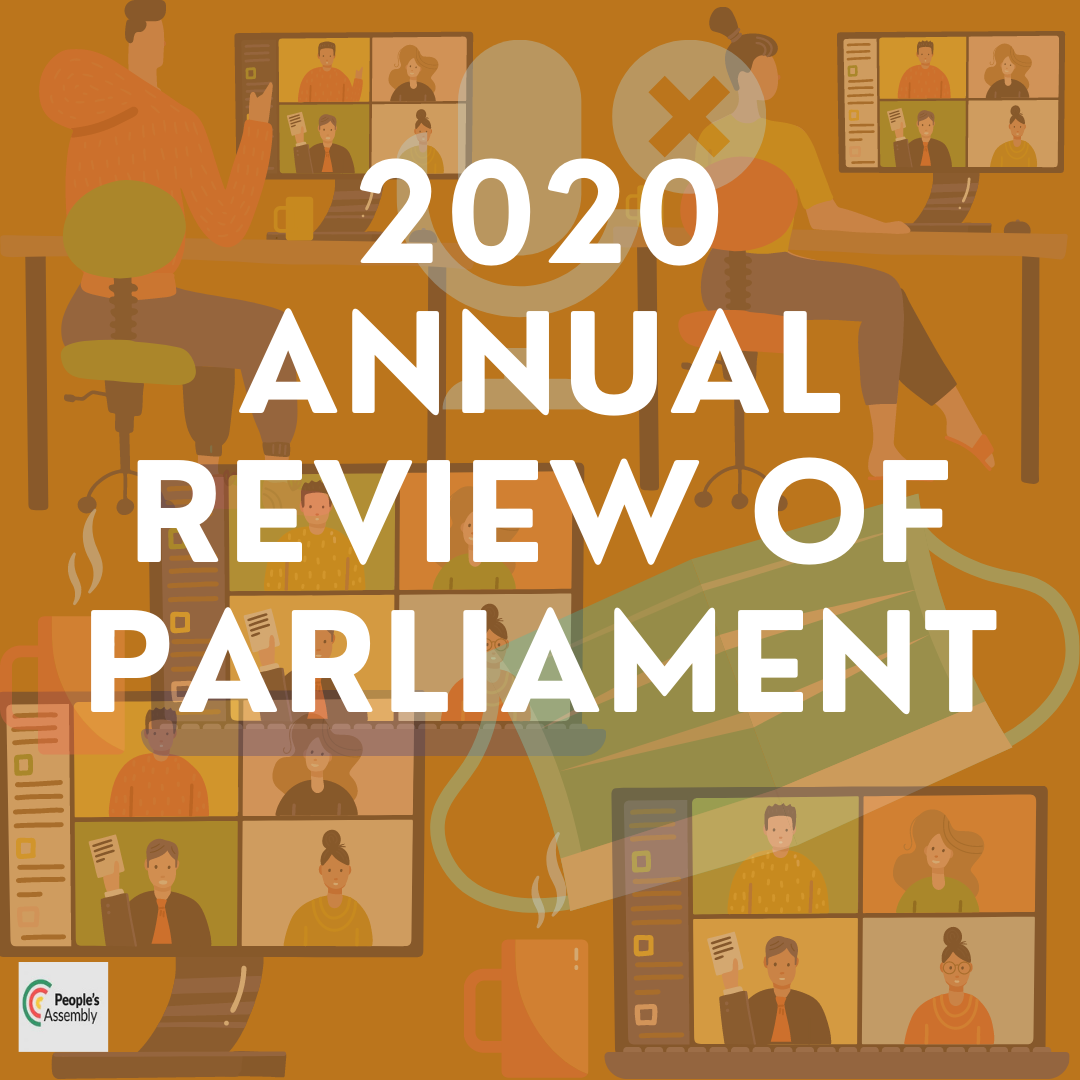 Following the transition to a virtual/hybrid Parliament in April, the 2020 parliamentary year came to an end on 9 December.

It was an unprecedented year

In March, Parliament took a decision to suspend its programme as a precautionary measure due to COVID-19, which saw a drastic limit to the number of people at the parliamentary precinct. Amid growing concerns about the indefinite suspension of legislative business, the legislature eventually decided to resume in mid-April, with the two Houses developing rules to make provision for the carrying out of business virtually.

There were challenges in the continuation of parliamentary duties and functions, including technical difficulties. However, both MPs and the public gradually eased into the 'new normal'. Throughout the remainder of the year, there continued to be intermittent hurdles, but for the most part, the business of Parliament proceeded in a satisfactory manner, both from a technological and participatory point of view. The virtual and hybrid Parliament is limiting and imperfect but the experimentation with technology enabled the legislature to fulfil its essential function during the pandemic.

A run-down of the 2020 parliamentary year:

Plenary business, which mainly focuses on debates and votes, is largely the high-point of Parliament’s political activity. Debates are a further means to bring important information to the attention of the Executive. 116 plenary sittings were held by the NA and NCOP this year.

During plenary sessions, some MPs were present in the chamber in Cape Town and others would join in through virtual platforms.

The sheer scale of COVID-19 means it touches almost every aspect of government - everywhere there are questions to be answered. As a result, the legislature prioritised debates, ministerial statements, events and questions to Ministers who lead departments affected by the pandemic. These sessions presented the Executive with opportunities to update Parliament on government responses towards dealing with the challenges that accompany the COVID-19 pandemic. As the custodian of co-operative governance and intergovernmental relations, the NCOP arranged interactive sessions with the Executive.

MPs also held many urgent debates throughout the year, some of which drew much public attention included:

A large part of the parliamentary year was spent considering and passing the three budgets tabled: main, supplementary and medium-term.

In February, the Minister of Finance tabled the main Budget. In June, a Supplementary Budget was then delivered, necessitated by the historic nature of the COVID-19 pandemic and economic downturn.

On the backdrop of the R500 billion social relief package, announced in April, President Ramaphosa delivered government’s Economic Reconstruction and Recovery Plan mid-October. Ramaphosa told Parliament the implementation of the Plan would, “according to the modelling done by National Treasury… raise growth to around 3% on average over the next 10 years.” It would also allow “debt reduction and reprioritisation that is supportive of growth and recovery.” Immediate reaction to the Plan, particularly from the opposition benches was low-key, largely highlighting the lack of freshness.

Hot on the heels of President Ramaphosa’s delivery, Minister Mboweni presented the mini-budget (Medium-Term Budget Policy Statement), at a time when government was making efforts to find ways to boost falling revenue. South Africa’s low economic growth coupled with the impact of COVID-19 has reduced the country’s earning in taxes and duties and the economy expected to contract by 7.8% this year.

Committees are the powerhouses of Parliament’s oversight and legislative work.

1278 committee meetings were held this year.

We have consolidated our reports on the COVID-19 related meetings here.

Committees also dealt with many important topics including the inefficiencies within the border management system which resulted in fugitives passing through them with ease and without detection.

The Standing Committee on Public Accounts (SCOPA) sat more than 40 times and has been at the forefront of tackling wayward SOEs and departments. This included engaements with the the following entities: SAA, SABC, Eskom, PRASA and DPWI

Apart from its legislative commitments, the Portfolio Committee on Justice and Correctional Services had a full plate dealing with progress reports on various investigations carried out by the Special Investigating Unit (SIU), filling a vacancy, case backlogs and conditions in prisons.

In terms of volume of meetings, no one comes close to the Cooperative Governance and Traditional Affairs Committee, which met more than 87 times, and was primarily occupied with the performance of municipalities and important legislation.

In line with its mandate, the Joint Constitutional Review Committee asked the public to submit comments on whether changes should be made to the Constitution. The Committee expressed concern that 33 out of the 54 submissions received fell outside of its mandate and highlighted that education was needed.

The Powers and Privileges Committee was also busy this year. In early November, the Committee deliberated on the disruption of SONA 2020 and resolved not to press charges of contempt against the MPs involved. Secondly, the committee held hearings into the incident that occurred during Minister Gordhan’s 2019 Public Enterprises Budget Vote budget vote speech on 11 July 2019.

The Speaker first referred the matter to the Subcommittee on Physical Removal of Member from Chamber for consideration, in terms of Assembly Rule 73(12). The Subcommittee made several recommendations including: The movement of the EFF members onto the floor space of the Chamber, to prevent the Minister from delivering his speech and/or to intimidate him, constituted a breach of the Powers, Privileges and Immunities of Parliament and Provincial Legislatures Act, 2004, and the Speaker should refer this matter to the Powers and Privileges Committee, as this amounts to a violation of parliamentary privileges. At the time of writing, the Committee had not made a final determination.

The virtual/hybrid Parliament was well-equipped to process legislation as in the pre-COVID-19 period. 24 Bills were passed, which is well-within the legislative output range of previous years. A significant number of them were money Bills, which accompanied the various budgets. See: Legislative Performance/Output in Parliament (2006-2017).

The Portfolio Committee on Justice and Correctional Services is processing three crucial Bills that will hopefully change the landscape in terms of how government departments, law enforcement and the courts deal with cases of violence against women and the vulnerable. The three Bills are, namely: the Domestic Violence Amendment Bill; the Criminal Law (Sexual Offences and Related Matters) Amendment Act Amendment Bill; and the Criminal and Related Matters Amendment Bill. Parliament has urged South Africans to put their heads together and contribute to their processing to ensure that a watertight legislative framework is brought about that will close all gaps in current laws and reinforce the hand of the criminal justice system to decisively break the back of the scourge of gender-based violence in the country.

The aforementioned Bills will resume their path to becoming law in the New Year.

On Section 25 Review process, the Ad Hoc Committee to Initiate and Introduce Legislation Amending Section 25 of the Constitution had a disrupted and disjointed year. It failed to complete its work on time due to COVID-19, had to be re-established, missed a second deadline and was given an extension till next March to complete its work.

On the National Health Insurance Bill, more than 64 000 written submissions were received after the call for comments in August 2019. The Committee has been grappling with how to process these submissions.

A major milestone was the passing of the Civil Union Amendment Bill. This was the second Private Members’ Bill to be passed by the legislature. The Bill came into force in late October following assent and signing by the President.

Early January, the Speaker approved a motion received from the Chief Whip of the Democratic Alliance requesting that Parliament initiate proceedings for removal of Public Protector, Advocate Busisiwe Mkhwebane, from office in terms of section 194 of the Constitution and National Assembly Rule 129R. National Assembly Rule 129U states that the Speaker must, when required, establish an independent panel to conduct a preliminary inquiry on a motion initiated in a section 194 enquiry. The Speaker appointed the independent Panel on 25 November 2020.

Following, its establishment, the panel held its first meeting on 2 December. Two days after its initial foray, the timeframe for the independent panel was extended by a further 90 days, effective on 25 November. The Speaker, in granting the extension, said it was imperative that the panel be afforded the necessary time required to carefully study the motion and evidence and, as part of its deliberations, also afford the Public Protector a reasonable period to make submissions.

On November 30, the Western Cape High Court dismissed the Public Protector’s application for leave to appeal against the judgment that rejected her bid to interdict Parliament’s impeachment process against her.

Following due processes, spearheaded by the Ad Hoc Committee on the Appointment of the Auditor-General, Parliament unanimously approved Ms Tsakani Maluleke’s nomination to replace the late Kimi Makwetu as Auditor-General, whose term expired in November. Her appointment was a high-point, as it was the first time ‘in a long time’ that Parliament unanimously voted on a matter.

The NYDA board appointment was mired in controversy. Parliament recommended candidates to fill the vacancies but later referred the matter back to the relevant committee amid complaints about the selection process that was followed.

Notably, Parliament appointed the Parliamentary Budget Office Director. This office provides independent, objective and professional advice and analysis to Parliament on matters related to the budget and other money Bills.

Citizens can get redress and assistance through petitioning Parliament.

Although it is a useful tool, the long delays in their processing has continually been lamented. The Joint Standing Committee on the Financial Management of Parliament, in its report on Parliament’s 2020/21 Mid-Year Performance tabled recently, thus recommended the processing of petitions be completed within three months (excluding recess periods) of service on the Speaker of the NA or the Chairperson of the NCOP.

Ten general petitions were sent to Parliament this year, with the bulk of them seeking Parliament’s intervention to service delivery issues in municipalities around the country.

There were new faces in Parliament following redeployments, several resignations and deaths. Regrettably, Parliament mourned the deaths of six MPs during the course of the 2020 parliamentary year.

Parliament has released the 2021 Parliamentary Programme Framework. Some of the highlights include oversight and legislative work, the State of the Nation Address (SONA) (11 February) and the ensuing debate, questions to the Executive, the Budget Speech (24 February), and committee work.

As with previous cycles, the 2021 local government elections are expected to have an impact on the parliamentary calendar. The elections are scheduled to take place between 3 August and 3 November.